Review: And So Is Hashem 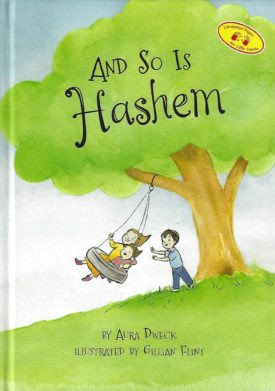 And So Is Hashem

Category: Picture Books
Reviewer: Chava Pinchuck
Buy at Hachai.com
When we do things that make other people happy, Hashem is also happy. So when a boy's mother calls him and he stops playing to go to her, when a girl refrains from waking up her sleeping father, when a boy greets his grandmother with a hug and a snack, when children share their toys or help neighbors, all these people are happy, "and so is Hashem." The repetition works well for young readers as they learn the not-so-subtle lesson. The illustrations are cute and colorful, depicting both boys and girls. The boys and the Tatty (father) are obviously wearing kippot, while the women appear to be wearing sheitels. A very short glossary includes Hashem, Bubby, and Tatty, but it easily adapted for all Jewish audiences by using the English words while reading.
The book is based on a verse from Pirkei Avos (3:13): "He used to say: If the spirit of one's fellows is pleased with him, the spirit of the Omnipresent is pleased with him..." so the book meets the Sydney Taylor Book Award criteria in terms of positive Jewish content. Although no one is doing anything particularly Jewish in the vignettes (i.e., observing Shabbat, celebrating holidays or life cycle events), they are doing mitzvahs in terms of letting a parent sleep or sharing toys.
Are you interested in reviewing books for The Sydney Taylor Shmooze? Click here!

Reviewer Chava (Kathe) Pinchuck worked in private and public libraries in New Jersey before making aliyah in 2012. In Israel she has worked as a cataloger of legal documents and a cybrarian for a distance learning institution. She is a past chair of the Sydney Taylor Book Award Committee, past co-editor of the Children's and YA Book Reviews for AJL News and Reviews, and the current editor of the Jewish Values Finder, a database of Jewish children's books. [Ed. Note: Chava is one of the co-chairs of The Sydney Taylor Shmooze.]
Aura Dweck Chava Pinchuck Gillian Flint HaChai Orthodox Picture Book Review