Review: From My Heart 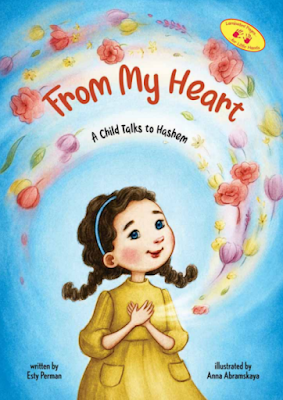 From My Heart: A Child Talks to Hashem

Category: Picture Books
Reviewer: Chava Pinchuck
A girl talks to Hashem because she has so much to tell God. She talks to Hashem a lot -- when she's happy, when she's said, when she's scared, and when sick people need help. Sometimes she sings the set prayers, and other times she whispers her own words. She makes sure to ask for Moshiach because she is anxious for him to come. The illustrations are vibrant and the girl's facial expressions make her feelings clear. Interestingly, there are no males depicted in the book. Books about God and prayer for young readers are challenging because it's hard to explain spiritual concepts. The "report" to Hashem is a good premise for the girl to give examples of why she talks to Hashem, and is reminiscent of (l'havdil) Anne LaMott's distillation of prayer into "Thanks, Help, Wow!". For adults, it's a little odd that she is telling everything to Hashem, when Hashem is All-Knowing, but for kids, it's an important lesson that you can always talk to Hashem and tell Hashem anything and everything.
The book meets the Sydney Taylor Book Award criteria in terms of positive presentation of prayer and connection with Hashem. It works for all denominations, as Hashem is always referred to as "Hashem," never He or She.
Are you interested in reviewing books for The Sydney Taylor Shmooze? Click here!

Reviewer Chava (Kathe) Pinchuck worked in private and public libraries in New Jersey before making aliyah in 2012. In Israel she has worked as a cataloger of legal documents and a cybrarian for a distance learning institution. She is a past chair of the Sydney Taylor Book Award Committee, past co-editor of the Children's and YA Book Reviews for AJL News and Reviews, and the current editor of the Jewish Values Finder, a database of Jewish children's books. [Ed. Note: Chava is one of the co-chairs of The Sydney Taylor Shmooze.]
Anna Abramskaya Chava Pinchuck Esty Perman HaChai Orthodox Picture Book Review