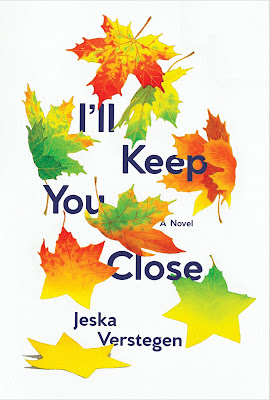 Category: Middle Grade
Reviewer: Beth L. Gallego
Buy at Bookshop.org
How does one honor the memory of those who died during a time one wants to forget? Debut novelist Jeska Verstegen examines the toll secret grief took on her own family in this poignant volume, originally published in the Netherlands as Ik zal je bewaren and translated from the Dutch by Bill Nagelkerke.
In snapshot vignettes, eleven-year-old Jesje presents, at first, unremarkable days in the ordinary life of a girl in 1980s Amsterdam. Perhaps her mother is unusually anxious, but that’s just how Mama is. Bomma, Jesje’s maternal grandmother, is in a nearby nursing home, suffering from dementia that has taken a turn for the worse. During a visit, she calls Jesje by someone else’s name, Hesje, and Mama refuses to say more than that it is the name of someone from far in the past.
Curious, Jesje investigates, gathering information from other family members and a trusty encyclopedia, puzzle pieces that when put together reveal a stunning picture: Mama does not talk about the war because while she and Bomma survived, many of their extended family did not. Even the fact that her mother’s family was Jewish is a revelation to Jesje. Over the course of the novel, Jesje considers what this means for her own identity, and how she will honor those lost family members in her own life.
In an afterword, Verstegen shares that the events of the book are true to her experience, though some adaptations and name changes have been made. A photo of Hesje described in one of the later chapters is also included.
This is a beautifully told story of family, secrets, and growing up. The Jewish content is most significant in its seeming absence: Jesje has no idea that her family is Jewish, let alone that they are Holocaust survivors. These are facts that have shaped her life without her even knowing it. Whether she incorporates Judaism into her identity later is outside the scope of the narrative.
A lovely, poetic, stand-out coming of age story.
Are you interested in reviewing books for The Sydney Taylor Shmooze? Click here!

Reviewer Beth L. Gallego grew up outside Chicago, earned her Master’s degree in Library and Information Science at the University of Illinois, and promptly moved to sunny Southern California, where she has been a Librarian since 2002.
Beth L. Gallego Jeska Verstegen Levine Querido Middle Grade Review