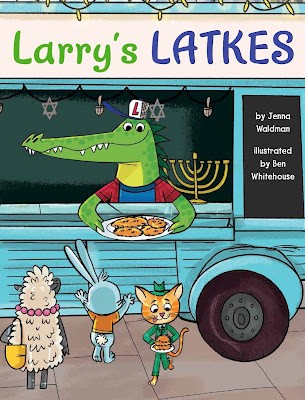 Category: Picture Books
Reviewer: Shirley Reva Vernick
Buy at Bookshop.org
Every Hanukkah, Big Larry the alligator brings out his latke truck and sells the best potato latkes in town using an old family recipe. This year, Big Larry is throwing a latke party for his animal friends, and he wants to try something new. He goes to the farmers market and buys all sorts of fruits and vegetables—but no potatoes. The results are a soggy, goopy mess. Big Larry doesn’t know what to do…until he gets a something-old, something-new brainstorm. He and his friends buy up all the spuds at the farmers market and make potato latkes mixed with fruits and veggies. The new creations are a hit, and the party is a big success.
The book includes a short note about the history of Hanukkah and the symbolism of fried latkes. It concludes with a recipe for Big Larry’s rainbow latkes with fresh rainbow salsa.
Told in lively rhyming verse, this story celebrates Hanukkah, friendship, and the joy of making new traditions by combining the taste of the new with flavors of the past. The bold, active illustrations of hipster animals (complete with cell phones, backpacks and bicycles) help bring the story to whimsical life. I recommend Larry’s Latkes for all picture-book audiences for its playful, engaging look at a beloved Hanukkah tradition. It introduces the treasured cultural tradition of Hanukkah latke-making to a new generation in a positive, inspiring, community-oriented way.
Are you interested in reviewing books for The Sydney Taylor Shmooze? Click here!