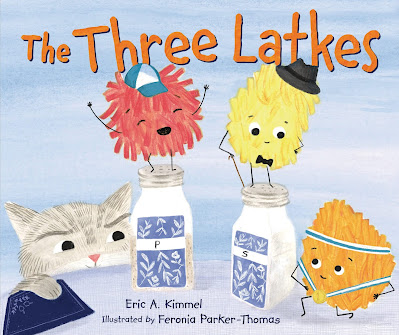 by Eric A. Kimmel, illustrated by Feronia Parker-Thomas

Jewish holiday books that riff off of a known folk tale can be fun, such as The Little Red Hen and the Passover Matzah, or The Runaway Latke. Here well-known author Eric Kimmel is lightly mimicking the part of the Gingerbread Man story where the fox outwits the Gingerbread Man and gobbles him up.

Latkes made from red, yellow, and gold potatoes argue about which of them is the best, and invite the cat to judge the contest by eating them up. The cat devours them after topping them with applesauce, sour cream, and jam. The winner of the contest remains forever unknown because the latkes are no longer there to hear the answer.

As an adult reader, I notice a number of logical inconsistencies. The most noticeable of these is the fact that the sentient latkes wish to be eaten, although they know that this will make it impossible for them to learn the results of their competition. The cat is chosen as judge because it “knows all about food. Whenever there’s food left on the floor, the cat licks it up,” yet this behavior is much more typical of dogs than cats. The cat is described as "clever" and is illustrated with villainous eyebrows, but the feline is not wily, as its destruction of the latkes is entirely by invitation. The yellow latke, who was fried in shmaltz (chicken fat), is topped with sour cream, rendering it trayf (non-kosher), and modern children are unlikely to be familiar with shmaltz in any case.

With the lack of a villain, a climax, or a resolution to the central question of which latke is best, the narrative lacks dramatic tension. All that said, young children may be entertained by this slight story with its cheerful illustrations. 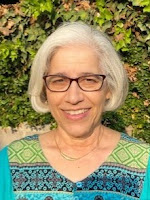