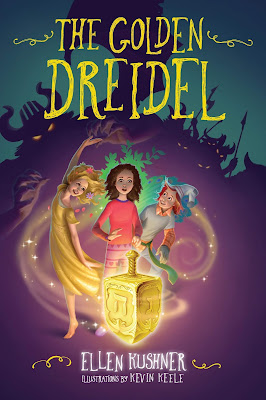 Category: Middle Grade
Reviewer: Dena Bach
Buy at Bookshop.org
The Golden Dreidel, by fantasy author Ellen Kushner, is a re-issue of the 2007 book The Golden Dreydl, itself a novelization of the 2002 recording, stage show, and concert, of the same name by Kushner and the Shirim Klezmer Orchestra. Billed as “A Klezmer Nutcracker for Chanukah,” the recording, like the book, is a charming mash-up of the famous Tchaikovsky ballet with klezmer music and Jewish folklore.
The Golden Dreidel follows the plot of "The Nutcracker," with a dreidel that comes to life. The narrative begins when Sara, envious of her non-Jewish friends during the winter holiday season, reluctantly goes to her extended family’s annual Chanukah party. While Sara is playing a game of dreidel with her cousins, the mysterious Tante Miriam arrives at the party bringing gifts for all the children. At midnight, Sara’s gift, a special golden dreidel, is revealed as a princess who leads Sara on an adventure into a magical world filled with riddles and stories, and characters from Jewish folklore, including the Queen of Sheba, King Solomon, and the Demon King, Ashmedai.
Though I admit to missing the old-fashioned quality of the klezmer music along with the story, the new illustrations for this edition add a more contemporary feel than the 2007 edition, and welcome diversity in Sara and the Queen of Sheba. The narrative has plenty of action, jokes, and silly riddles to attract a reader on the younger side of the target age, as well as an explanation of the dreidel game for the uninitiated.
The Jewish content of the story is not limited to the Chanukah framing story. After the Chanukah party and dreidel game, as the story roams far from traditional Chanukah stories into fantasy, it is through a Jewish lens. The names of well-known figures in Jewish folklore are included, though not much is told of these stories. It is interesting that Kushner chooses “The Nutcracker,” a quintessential Christmas story, and gives Tante Miriam a familiar sack of gifts, in order to address the feelings of a Jewish child who finds the winter holidays a difficult time. At the end of the narrative, Sara feels good about her adventure, but does not directly address her issues of missing out. But if this book sends just one child like Sara on a search through Jewish texts to learn more about the legends involving of King Solomon, the Queen of Sheba and the Demon King, it will be successful in a Jewish context. I'd recommend a search for "The Golden Dreydl" klezmer recording as well.
Are you interested in reviewing books for The Sydney Taylor Shmooze? Click here! 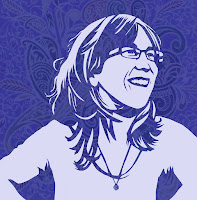 Reviewer Dena Bach has a BA in Fine Arts from Brandeis University, a BFA in Illustration from the Massachusetts College of Art and Design and an MA/MFA in Children’s Literature and Writing for Children from Simmons University. She has worked as an illustrator, a bookkeeper, a bookseller, and a teacher of children from ages 2 to14. She is comfortable only when there is a large mountain of children’s books on her bedside table.