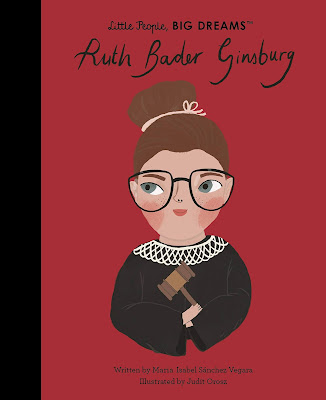 What's left to say about Ruth Bader Ginsberg that has not been said already? That's the problem that faces every picture book author contemplating a book about her, and one that Maria Isabel Sánchez Vegara solves by creating this picture book biography as part of a long series about people who go on to extraordinary things in their lives. Written in British English (Vegara is Spanish), Vegara tells a straightforward tale of RBG, ending with a death that reflected a life which was all her mother dreamed of. Vegara traces RBG's feminism back to her mom, with the mother's death having a big influence on the protagonist. The text is straight-ahead, and not afraid of an exclamation point to make a point or two. The challenge in all books like this is what to leave out, and how what is left out shades the narrative. The challenge for the reviewer is to review the book as it is, and not discuss what the author left out. What's more troubling is a spread that has Ruth as a grandmother, and saying she lost a battle over the Voting Rights Act, which bars race discrimination in voting. A young reader could lose the nuance -- the case did not mean the Voting Rights Act itself was struck down.

The artwork is pleasant and engaging, and artist Orosz is not afraid to have a little fun. For example, RBG's famed white collar is a recurring motif, going all the way back to her first day at school and even a visit to the library. The artwork is stylized and non-realistic, with lots of reds and pinks as core colors. It works just fine to support the text.

However, I don't really see this as a Sydney Taylor contender. Though the text is clear that Ruth is from a Jewish family, and her father is depicted in a kippah at the shiva following the death of Ruth's mom, there's no other reference to Ruth's Judaism, how her Jewish practice affected her life or her feminism, that she married another Jew, et cetera. It's a decent introduction to RBG's life, but I'd be surprised to see it on the Sydney Taylor list.