A Tribute by Miriam Udel

A sister of my soul is no more. So many of us are devastated at the inconceivably sudden passing of Paula Cohen Martin, the artist who became my partner in creating HONEY ON THE PAGE: A TREASURY OF YIDDISH CHILDREN’S LITERATURE, and who was on the cusp of releasing her own delightful first picture book, BIG DREAMS, SMALL FISH (Levine Querido).

As befits an old-timey Yiddish project, our union was arranged by matchmakers human and divine. Paula attended the TENT workshop at the Yiddish Book Center for authors and illustrators of Jewish children's books, where I was teaching. Program alumna Joanne Levy (author of SORRY FOR YOUR LOSS and herself no stranger to grieving) knew I was completing a crazy-ambitious anthology for which I was seeking an illustrator. Knowing Paula had a huge love for and curiosity about Yiddish culture, she connected us. I adored Paula's work and sensed immediately that its comic energy would infuse the book with the lively spirit of YIDDISH JOY that I hoped to put into the world. Alongside their whimsy, her lines were so disciplined and sure.

As an academic press, NYU wasn't really used to working with illustrators, so Paula and I seized the opportunity for "art direction by khevrusa" (learning partnership). Not only did she make the cover illustration (a ring of images drawing from the anthology's selections), but she drew the eight full-page images heading each section and 46 (!) tiny but meticulous spot illustrations to head each entry. We consulted about all 55 of those images. 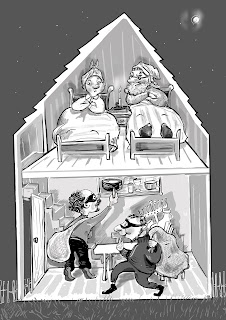 To Paula, being accurate and true to the world of the stories was a matter of honoring the memories of those who had written and originally read them. The attached image from Shloyme Simon's "A Deal's A Deal" was her absolute favorite in the anthology. She related on a human level to the bickering and stubborn yet loving couple who allow their house to be burgled rather than either one getting out of bed to shut the door on a windy night. She had the brilliant idea to show the whole scene, two floors, in cutaway and was careful to depict the couple in their separate beds, as these shtetl dwellers of a century ago would certainly have slept. Mirtl's hair was covered; Avrom's beard was luxuriant.

Here are some additional visual details Paula and I discussed: the cats of Jerusalem circa 1860, boys' yarmulkes and tzitzis, 1930's Brooklyn architecture, fire truck design, and fire helmets, women’s hats, and Jewish beauty ideals that might influence the depiction of a princess in a fairy tale....

Paula gave a wonderful interview to In geveb: A Journal of Yiddish Studies, describing her artistic process. 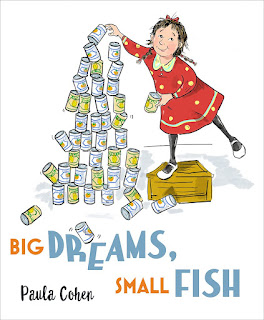 BIG FISH, SMALL DREAMS is a love letter to the American Ashkenazi immigrant experience in the 20th century, no small part of which entailed girls finding their voices and their power in ways they had never before been able to do. Protagonist Shirley, with a good head on her shoulders, is one of those girls. Paula was eager to include Yiddish in her text and to make sure it was as authentic and historically accurate as her images. It is a delight to read and a wonderful way to remember her. It seems unspeakably cruel that she left this world as she was planning the launch of this book and so, so much more.

As just the smallest window into her generosity of spirit, Paula and I had corresponded just days before her death about her desire to order extra copies of Honey on the Page to have available for purchase at upcoming events for her book. This is the kind of sisterhood she showed to so many friends in the world of Jewish children’s literature.

Looking back over Paula’s Instagram account, a freely available gallery of her pleasures and interests, I am struck at how cleverly she balanced drawing the world as it was and drawing the world as she hoped to see it. The comic yet insistent lines of her drawing strove to transcend the lines of race, ethnicity, and religion. Her subjects are of many ethnicities and skin tones and often wear visible markers of minority religions in America, like the hijab or kippa. 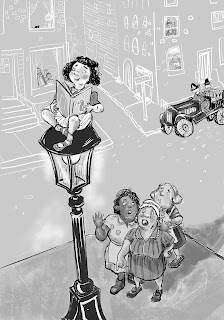 One of my favorite images in Honey in the Page is drawn from a story “An Unusual Girl from Brooklyn” by David Rodin, set in that borough during the 1930’s. Shprintse, the eponymous girl, has climbed to the top of a lamppost in order to read her book in peace, away from her tagalong little sister and the chores awaiting her at home. In the moment that Paula chose to illustrate, a gaggle of neighborhood moms have noticed her location, become alarmed, and summoned the fire department. Paula made sure that the mothers united in pesky concern for the girl’s safety are a visibly diverse group. She also made sure that we see the scene from up high, close to Shprintse’s perspective.

Paula was a self-described foodie with a particular passion for the appetizing of Russ & Daughters; she was over the moon when they adopted a drawing of hers that featured the store front.

Finally, I will say that Paula radiated immense mom energy. She was so proud of her family, kvelling about her children and their own creative pursuits, including her son the filmmaker. Everyone who knew her was in love with her inimitable and richly depicted schnauzer Joxter, who is the goodest boy even when he is being the baddest boy.

Joy and precision: that was Paula. This world just got a lot grayer, and the next one just got a lot brighter. Mayn khaverte tayere, zolstu hobn a likhtikn gan eydn; I hope you illuminate Paradise with your style and your stylus.

From the Shmooze editors: A groysn dank, a big thank you, to Miriam Udel for allowing us to share this beautiful tribute to author-illustrator Paula Cohen Martin. Paula will be deeply missed within the Jewish children's literature community and beyond. Her official obituary may be found here. May her memory be for a blessing.

Miriam Udel is associate professor of Yiddish Language, Literature and Culture at Emory University. She is the editor and translator of Honey on the Page: A Treasury of Yiddish Children’s Literature (NYU Press, 2020) and is currently writing a critical study of Yiddish children’s literature and its relationship to American Jewry as an NEH Public Scholar.

Photo of Paula is from Instagram; photo of Miriam is by Shuli Seidler-Feller