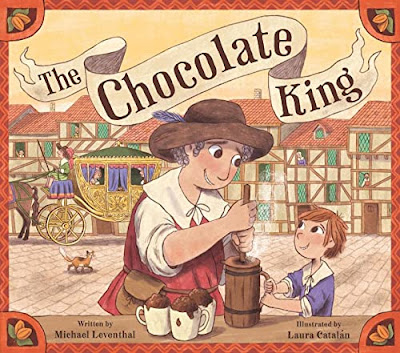 Little Benjamin, who immigrated to France from Spain with his family when he was a baby, longs to be a Chocolate King, just like his grandfather, Marco. But, in 1630, no one in France had tasted chocolate—and, when they did, they hated it. Still, Benjamin loves to hear Marco’s tales of life in Spain before they were forced to become conversos. Trying to learn the family trade, Benjamin sneaks into the kitchen, stumbles, makes a mess of the chocolate cooking on the stove, and literally slips out the door, landing in front of the carriage of the real King of France. Whereupon, the king downs four cups of cocoa and declares it delicious. From then on, the French people love chocolate, and the family prospers. Back matter contains “A Bite-Sized History of Chocolate” and depictions of the process for turning cocoa beans into chocolate bars. The illustrations are humorous, colorful, and convey life in 17th-century France in charming detail. The story conveys bite-sized information about the dispersal of Jews during the Inquisition. The timeline is a bit fuzzy, since Marco’s family left Spain around 1622, long after most needed to do so. The key plot point of Marco’s falling in front of the king’s carriage is cute, though improbably coincidental.

The Chocolate King is about a family that was Jewish before the Inquisition began over a century earlier. As conversos, they do not have the opportunity to demonstrate their Jewishness openly, and this family does not do so behind closed doors. Thus, there is no evidence that they remain identifiably Jewish other than through the stories Marco tells Benjamin. This would not disqualify the book from consideration for the award but limits its connection.