Review: From Dust, A Flame 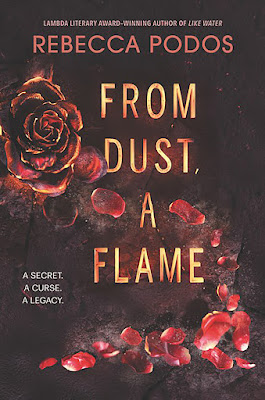 From Dust, A Flame

With a scholarship to Winthrop Academy in Jamaica Plain, Massachusetts, bookish Hannah Kowalski secures the stability she craves for herself and her “theater kid” older brother Gabe. But the foundation begins to crack on the eve of Hannah’s seventeenth birthday, when her mother reveals that she is Jewish, the first of her many secrets. The next morning, Hannah awakens to golden, snakelike eyes staring back at her in the mirror. Soon after, Hannah grows wolflike canines, and Malka departs on a quest to find a healer to ensure Hannah’s safety. A one-week trip turns into three, and that’s when a family death announcement arrives in the mail. Close siblings, Hannah and Gabe set out on a mission to find their mother and the family they never knew in the quaint village of Fox Hollow, New York, where they discover their Jewish family roots. While observing the rituals of sitting Shiva and celebrating Shabbat, Hannah befriends heartthrob Ariel Leydon, the granddaughter of a local healer and old family friend. Together, the teens engage a golem for protection and fight a demon’s curse.

The theme of identity is woven throughout the novel with precision. Hannah and Gabe are on a journey to understand what it means to be Jewish and the many ways Judaism can be defined—through halacha, tradition, rituals, peoplehood, and story. Hannah is also exploring her identity as a queer teen. Alternating plot lines build tension in tandem between Hannah’s first-person narration and a third-person flashback of Malka’s story as a youth, which makes for an exciting page-turner.

From Dust, A Flame is rich in Jewish folklore and plunges the reader into an adventurous introduction to Jewish supernatural monsters. Adding intrigue, a family friend and opshprekherke, or Jewish healer, leaves behind journals documenting instructions for bringing to life the golem she left behind, just in case the family needs protection. The fantastical retelling of the tale of “The Underwater Palace,” a story from 19th Century Eastern Europe, is rich with visual imagery, painting a magical scene of flying fish and ice-blue hallways glowing in pearly light beneath the rivers in both Prague and Fox Hollow. The novel also touches upon Prague’s Holocaust history. Hannah dreams of Nazi occupied Prague, watching a chilling parade through her grandmother’s eyes, and she also hears her aunt tell the story of their family loss. The impact of generational trauma is illustrated through Jitka’s story, Hannah’s grandmother. Her family’s lone survivor, Jitka departed Czechoslovakia on a Kindertransport at age 16. In turn, Jitka kept her family close and insulated in the Hudson River Valley. As a teen, Malka had little freedom, and her greatest fear was that her simple life would never change, being bound to her farmhouse, small village, school, and synagogue. The novel is rich in Jewish vocabulary, expressions, and observances, and readers would benefit from a glossary for quick reference, even though the author often provides a cultural context.

Carefully researched and braided together, Jewish folklore, history, and daily life invite teens into a contemporary mystery fantasy rich in questions about identity, making From Dust, A Flame a strong contender for the Sydney Taylor Book Award.

Reviewer Sarah Blattner is a high school English teacher in Portland, Oregon, and she has been in and around the middle and high school classrooms for over 20 years, both in Jewish Day Schools and public schools. She is also an aspiring young adult author, drawing inspiration from her joyful summers at Jewish sleepaway camp, leadership experiences in the B’nai B’rith Youth Organization, her childhood in Pittsburgh, Pennsylvania, and her clever students. She has been a member of the Society of Children’s Book Writers and Illustrators since 2008.
Balzer + Bray HarperCollins Rebecca Podos Review Sarah Blattner Young Adult