Review: Once More with Chutzpah 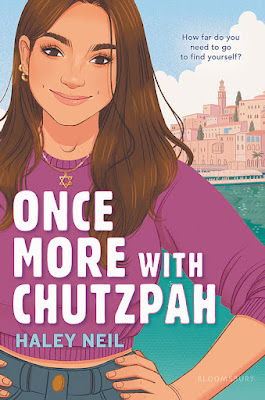 Once More with Chutzpah

Tally and Max are eighteen year old twins recovering from a tough year. Max was involved in a tragic car accident, in which he survived but the drunk driver did not. Will a winter youth trip to Israel through their synagogue help them get back on track? Narrator Tally is intending on it. Her goals for the trip include helping her brother out of his grief-stricken depression and supporting him to apply to attend Boston University with her. As the story progresses, Tally begins to accept her own grief as it relates to Max’s accident as well.

Tally is introduced to Israel through the iconic moments of most Israel teen tours: a swim in the Mediterranean and the Dead Sea, a kabbalistic lesson in Tzfat, the Holocaust Memorial Yad Vashem, camel-riding and camping in a Bedouin tent, climbing Masada at sunrise, and putting notes in the Western Wall. The participants also meet Israelis, who will later join them for a parallel trip in the United States. Tally’s experiences in each location provide good context and description for teens going on an Israel trip. Tally is also up front about her own mixed feelings related to security in Israel and the Israeli-Palestinian conflict. Tally’s Safta has told her about this: “We want peace; we all want peace. It is, the problem is, in Israel and in Palestine, we all do not agree on the terms.”

The trip participants on this Temple-led trip include several well-developed characters representing a diverse range of Jewish teens, including David, a Yeminite madrich; Saron, a new close friend of Ethiopian Jewish descent; and several LGBTQ+ leaders and friends on the program. Tally also deals with her own and others’ perceptions about whether she is “Jewish enough,” because her father is Jewish but her mother is not. One of Tally’s friends on the trip is also a traditional, heterosexual Jew who keeps kosher.
Tally is clear about dealing with her own anxiety, a welcome inclusion of mental health in a Jewish young adult novel. She struggles with understanding her emotional and romantic feelings for David, gradually discovering a new sexual identity for herself which she expresses at the Jerusalem Pride festival.

The dialogue in this story is clever and fun to read, especially Tally’s awkward yet flirtatious conversations with David. Saron is exactly the type of friend you might hope to meet on an Israel teen trip. Small tensions in new friendships arise and are resolved through kindness and forgiveness. It is surprising, and at first a bit disconcerting, to discover how Tally has misunderstood Max, and how much she has been keeping from the reader (and perhaps, from herself). Tally’s realizations and choices at the end of the story show how much she has grown.

While at times this book felt almost too ambitious for the wide range of issues it attempted to cover in such a short trip, it is definitely a worthy contender for the Sydney Taylor Book Award.
Are you interested in reviewing books for The Sydney Taylor Shmooze? Click here! 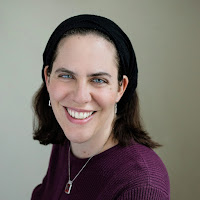 Reviewer Evonne Marzouk received her B.A. in the Writing Seminars program of the Johns Hopkins University. Since 1999 she has worked professionally for the Environmental Protection Agency. As founder and director of Canfei Nesharim, Evonne created and distributed Torah teachings on the environment, and co-edited the 2014 book Uplifting People and Planet: Eighteen Essential Jewish Lessons on the Environment. Evonne’s first novel, The Prophetess, was published by Bancroft Press in 2019. Evonne was a touring author with the Jewish Book Council and has spoken to schools, Bat Mitzvah programs, synagogues, and book clubs about growing into all our gifts.
Bloomsbury Evonne Marzouk Haley Neil Israel Review Young Adult