Review: You Are A Star, Ruth Bader Ginsburg! 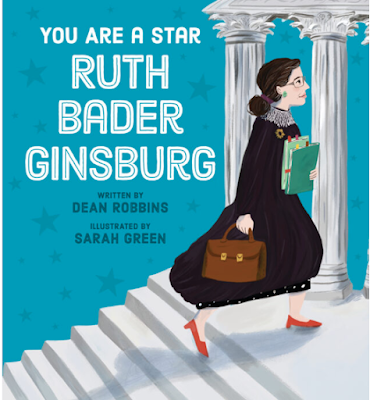 This picture book biography of the famed jurist is told in the first-person. With its short punchy phrasing and relatively large sans-serif font, it is aimed at slightly younger audiences than its predecessors, including Ruth Bader Ginsburg:The Case of R.B.G. vs. Inequality by Jonah Winter and I Dissent!: Ruth Bader Ginsburg Makes Her Mark by Debbie Levy. It is also the only picture book biography of her written since her death. With sentences like, “Would you believe that my school even banned women from the library?” and attention paid to Ginsburg’s other interests, like Greek mythology (when she was a child), dancing, and opera (throughout her life), and others, this biography makes Ginsburg relatable. The realistic illustrations which include Ginsburg enjoying her many hobbies, holding a dinner she burned, and working out with weights as an older woman also serve to humanize her. With a timeline, glossary and other resources as backmatter, this biography, available only in paperback, is a useful addition to the other titles on RBG.

This book may not have enough Jewish content to be eligible for the Sydney Taylor Book Award. It makes mention of Ginsburg’s Jewishness only twice in the body of the book. In the author’s note, it states that she faced “discrimination as a girl and as a member of the Jewish faith” but the text never gives examples of the latter, while giving plenty of examples of the former. 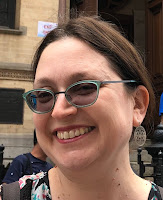 Reviewer Rachel J. Fremmer is a lawyer-turned- elementary-school librarian. She is a native New Yorker and lives there with her husband and two daughters, ages 16 and 14, who are rapidly outgrowing her area of book expertise. She loves baking and doing crossword puzzles.
Biography Dean Robbins Picture Books Rachel J. Fremmer Review Sarah Green Scholastic Press