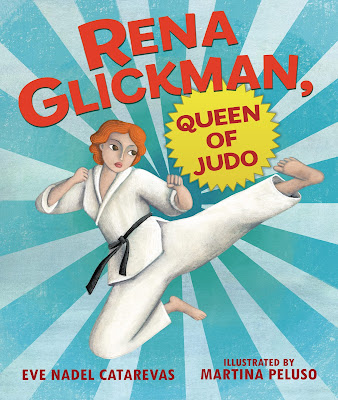 Rena “Rusty” Glickman was a scrappy Coney Island teenager in the 1950’s. As a young girl, Rena’s interests leaned toward conventionally male pursuits, including weight lifting and judo. There was no space for women in the world that interested her. Disguising herself as a man, she won a judo competition only to have the trophy revoked upon her gender revelation. Still, Rena refused to bend to societal norms. Her innate strong sense of self and persistence led her to become a judo master, no small feat for a woman in a men’s sport. Her trailblazing story lays out her path to what became her life’s work: creating a space for women in judo and developing it as a legitimized Olympic sport. Throughout her life, Rena was unconventional and fierce, never wavering in her mission despite the many obstacles in her path. With this solid message, she is a role model for all children. The book’s engaging text is paired with a pleasing color palette and richly detailed illustrations. The characters’ eyes are both soulful and thoughtful. A biography on Rena Glickman is overdue, and this book portrays her with a powerful independence and unwavering persistence.

The subject of this book was Jewish, as indicated by one reference to Shabbat. No other Judaic elements are included. The book has literary merit and has been thoroughly researched by the author. The background characters include some ethnic diversity. An author’s note at the end provides a good recap and includes photographs of “the real” Rena. This book is an enjoyable read and good reference on a little-known champion of women in judo.
Are you interested in reviewing books for The Sydney Taylor Shmooze? Click here!

Reviewer Shanna Silva is an award-winning author and Broadway producer. She has written three children’s picture books: A Dog’s Guide to Being Human, Hannah’s Hanukkah Hiccups and Passover Scavenger Hunt. Shanna is also the author of over 40 hi/lo books for emerging readers. Her work has been featured in Kveller, Bella Magazine, Twins Magazine, Multiples Illuminated I and II, and Chicken Soup for the Soul. Shanna lives in New York with her family and a meshuggenah sheepadoodle named Drake.