Review: Wishing Upon the Same Stars 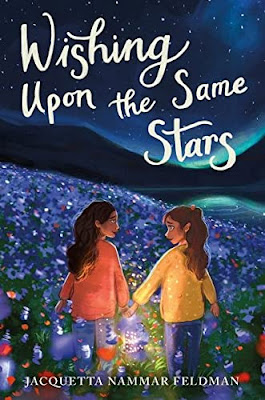 Wishing Upon the Same Stars
by Jacquetta Nammar Feldman
HarperCollins, 2022


Wishing Upon the Same Stars is the first novel written by author Jacquetta Nammar Feldman.
When twelve-year-old Yasmeen’s father gets a new job, her family picks up their lives from a predominantly Arab Detroit neighborhood and moves to San Antonio, Texas. In their new neighborhood and middle school they are the only Arab American family. To Yasmeen they stick out like a sore thumb, from the way they decorate their home to the foods they eat. Yasmeen is self-conscious about how different she looks from the other girls in her new school. If you have ever felt alone or invisible in a social situation you will relate to Yasmeen.

Yasmeen meets Waverly, a friendly girl whose father works in the same office as Yasmeen’s father. She invites her to join the popular girls at lunch. But soon the leader of the group begins to tease Yasmeen and she feels unwelcome and uncomfortable with these mean girls. Waverly does not stand up for her and Yasmeen has to summon all her resolve to find a new group of friends.

Then she meets the girl across the street, Ayelet Cohen. Ayelet’s father is an Israeli American from Jerusalem and Yasmeen’s father is an Israeli Arab who grew up in Jerusalem. Their families are on opposite sides of the Israeli - Palestinian divide. Can these two families be friends? As the news carries stories of Israeli Palestinian conflict in the Middle East, Yasmeen’s parents try to avoid meeting the Cohens across the street. Yasmeen and Ayelet become friends at school and then bring their parents together.

Yasmeen learns some important lessons about friendship, second chances and acceptance. She learns what it means to be welcoming to everyone and to feel positive about herself. She helps her family become a part of the diverse community they are living in. She begins to recognize that friendship is based on standing up for your friends and second chances. An important message from this book is to reach out and connect with people individually and not group them by religion, race or other ways that separate us.
Alyelet celebrates her Bat Mitzvah during the course of the story, but the Jewish content in this book is more about how Jews and Arabs are living in conflict in Israel. There are references to the Palestinian Nakba of 1948, when the Palestinians were displaced from their homes. There are references to Israel being the Jewish homeland. There is discussion of the discrepancy between the diverging sides of who is right and who is wrong. Yasmeen and Alyelet are two young Americans trying to bring peace between their families as a start to peace between the two differing viewpoints. 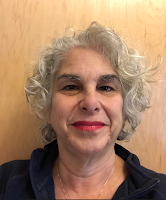 Reviewer Merle Eisman Carrus is a Jewish educator and leader, who loves reading, continuing to learn, and sharing her learning with others through her philanthropic work. She graduated from Emerson College and received a Master's Degree in Jewish Studies from Hebrew College. Merle is the National President of the Brandeis National Committee, a fundraising organization for Brandeis University, and sits on the University Board of Trustees. In addition, Merle is the Publication Chair for The New Hampshire Jewish Reporter. She enjoys sharing her love for reading as the co-chair of Women's League Reads for Women's League for Conservative Judaism.
HarperCollins Jacquetta Nammar Feldman Merle Eisman Carrus Middle Grade Review