Review: The Greatest Song Of All 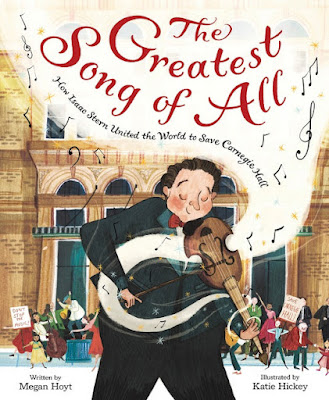 The Greatest Song of All: How Isaac Stern United the World to Save Carnegie Hall

The Greatest Song of All, How Isaac Stern United the World to Save Carnegie Hall, is easily one of my favorite picture book biographies. It’s a dual story about violinist Isaac Stern and the cultural significance of New York’s Carnegie Hall. These story lines weave together as Isaac develops his extraordinary talents and falls in love with the venue whose stage has been graced by the likes of Marion Anderson, Albert Einstein, Duke Ellington, and Pyotr Tchaikovsky. Written in beautiful prose that uses the five senses to place the reader in Carnegie Hall and New York, it’s complemented by sophisticated illustrations that depict a diverse, vibrant city. Isaac is the child of poor Jewish immigrants from Ukraine (particularly resonant with current events), whose parents find a way to nurture his musical gifts. Adult Isaac encounters city planner Robert Moses, portrayed as a greedy industrialist expelling impoverished citizens from their homes to make way for the construction of Lincoln Center. Moses also intended to bulldoze Carnegie Hall and Isaac, armed with his passion, rounded up wealthy donors and politicians who ultimately saved it. Stern’s mark is indelible as the music hall was declared an untouchable historic landmark. Themes of fortitude, celebration of the arts, immigration, community voice, and the big difference one person can make, are seamlessly woven into this superbly told and illustrated tale.

The Greatest Song of All is thoroughly researched and the back matter includes more details about Isaac Stern, a timeline, and a copy of the petition circulated to stop the demolition of Carnegie Hall. It further expounds upon the difficulties Jews faced in Ukraine and the antisemitism that preceded the Holocaust. While it is made clear that Stern was Jewish, the book focuses on his secular life and contributions to the arts. The illustrations depict the melting pot of a nascent New York City, where Jews blend in with other hard working, economically challenged folks. The text skews to the upper end of a picture book audience. I hope this book is considered for The Sydney Taylor Book Award because it highlights the immense contributions of a prominent Jew to New York City and the cultural arts that impacts many generations.
Are you interested in reviewing books for The Sydney Taylor Shmooze? Click here!

Reviewer Shanna Silva is an award-winning author and Broadway producer. She has written three children’s picture books: A Dog’s Guide to Being Human, Hannah’s Hanukkah Hiccups and Passover Scavenger Hunt. Shanna is also the author of over 45 hi/lo books for emerging readers. Her work has been featured in Kveller, Bella Magazine, Twins Magazine, Multiples Illuminated I and II, and Chicken Soup for the Soul. Shanna lives in New York with her family and a meshuggenah sheepadoodle named Drake.
Biography Katie Hickey Megan Hoyt Picture Books Quill Tree Books Review Shanna Silva