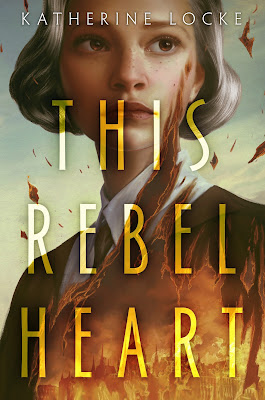 This Rebel Heart
by Katherine Locke
A Borzoi Book/Alfred A. Knopf (imprint of Random House), 2022

Category: Young Adult
Reviewer: Sarah Blattner
Buy at Bookshop.org
Living with her Tante Ilona, a Holocaust survivor, in post-WWII Budapest, Hungary, Csilla Tisza’s life rests on the edge of a knife, cutting between the truths and lies about her parents’ deaths and the false exoneration for their crimes. Csilla must decide if she will stay in Hungary and fight or flee to safety.

Constantly under surveillance by the ÁVH, the State Protection Authority, Csilla knows you can be “disappeared” for a range of suspicions. While being followed one morning, she finds safety in Azriel, a suspiciously friendly stranger who doesn’t quite sound like a Hungarian. Meeting Azriel is not by chance; however, because he is bound to Csilla and her friends as they light the flames of revolution.

Several literary attributes stand out in This Rebel Heart. The Duna River is a magical protector of Csilla, calling to her as the revolution builds in power and purpose. In addition, the absence and return of color serves as a motif woven throughout the story, reflecting the impact of the revolution.

Queer representation matters, and this novel telling of the Hungarian Revolution imagines authentic lived experiences by including nonbinary and bisexual characters. First, one of Csilla’s co-conspirators, a senior staff member at the newspaper, reveals to her that he was her father’s old lover and friend. Also, Tamás Keller, a university student and gentile, asks Csilla to help him find out what happened to his gay lover who was disappeared by the ÁVH. As the story develops, Csilla and Tamás’ relationship shifts from friendship to romantic interest, but later, Csilla walks in on Azriel and Tamás intimately engaged. Azriel is also portrayed as gender fluid, moving between bodies and times in his role as the Angel of Death. Finally, the golem, fashioned in her father’s image, is referred to with they/them pronouns.

Carefully researched, This Rebel Heart captures the Hungarian Revolution of 1956, a story not often written about in young adult literature. The novel opens with Csilla and her Tante Ilona reciting the Mourner’s Kaddish for her parents, who were found guilty of being Titoists and Zionists.

A few notable literary elements shape the Jewish content of the novel. First, the character Azriel reveals himself as the Angel of Death, reflecting rabbinic literature and Jewish folklore. However, Locke offers a fresh presentation of Azriel, appearing as a likable, nonbinary character, one who shows affection and empathy toward humans while making them promises. The river also serves as a Jewish safe haven, giving Csilla’s family shelter during the Holocaust and giving life to the golem. In addition, on the night of the revolution, the river lights the way by offering Csilla a “ner tamid” or eternal flame the night the government cuts the electricity. And finally, Csilla recalls her mother’s strong belief in the Talmud, where it is written that if you can stop an injustice, you are obligated to do so. This gives Csilla resolve, and her rebel heart is awakened as the story grows.

This Rebel Heart will appeal to readers who enjoy historical fiction with queer representation, Jewish folklore, and a magical realism twist. This Rebel Heart is a strong contender for the Sydney Taylor Book Award for its literary merits, strong Jewish content, queer representation, and unique telling of the Hungarian Revolution.
Are you interested in reviewing books for The Sydney Taylor Shmooze? Click here!

Reviewer Sarah Blattner is a high school English teacher in Portland, Oregon, and she has been in and around the middle and high school classrooms for over 20 years, both in Jewish Day Schools and public schools. She is also an aspiring young adult author, drawing inspiration from her joyful summers at Jewish sleepaway camp, leadership experiences in the B’nai B’rith Youth Organization, her childhood in Pittsburgh, Pennsylvania, and her clever students. She has been a member of the Society of Children’s Book Writers and Illustrators since 2008.