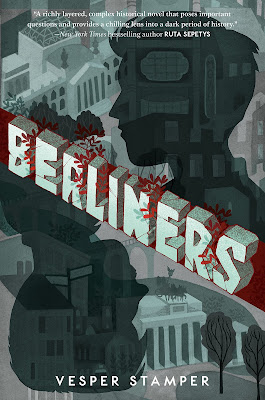 In WWII Berlin, fifteen-year-old Rudolf is given the Hitler Jugend uniform and told to be on the lookout for Jews in critically-acclaimed author-illustrator Vesper Stamper’s latest novel Berliners. Rudolf doesn’t give it much thought until he discovers his crush is Jewish and turns her in. Later when Rudolf meets scared teen Ilse, he realizes he must do what he can to save her. She will be his redemption. When unfaithful Ilse discovers she is pregnant, they reluctantly decide to wed.
This page-turning story fast-forwards the reader to 1961 when twins Rudi and Peter are fifteen and follow the mantra "twins against the world." Peter is a creative thinker, popular and smart. Rudi is jealous of his twin and believes in the words of the socialist party. When the parents split up, Rudolph escapes to West Berlin just before the Berlin Wall is built, bringing faithful socialist Rudi along and leaving freethinker Peter behind in East Berlin, where his rebelliousness gets him arrested.
The family in this story is not Jewish, but with the setting of Berlin between WWII and the 1960s, there is certainly content of Jewish interest. There’s an important scene where Peter learns from his girlfriend’s mother, who is in hiding for saving a Jew, how the party purged Jews in high positions. A powerful line reads, “those who inflict terror do it because they themselves are terrorized.” Rudi’s love interest Angelika was popular at school until her Jewish identity became known. Rudi had never met a Jewish person before. Angelika and her father have fewer scenes than our protagonists but are unforgettable in demonstrating the Jewish experience of antisemitism through Stamper’s strong voice. A heart-wrenching scene plays out when the city commemorates a concentration camp without ever mentioning the word "Jew," instead claming that the victims were murdered because they were socialists who loved their people.
This YA novel brings heart to a divided nation and a divided family before and after the building of the Berlin Wall. It could spark valuable discussions in a classroom setting or with family and friends. Stamper’s black-and-white drawings bring eye-catching visualization to the narrative. 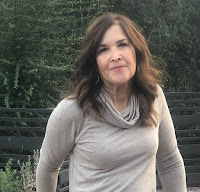 Reviewer Ronda Einbinder is a teacher/writer currently working on a young adult novel and picture books. She is a reviewer for Goodreadswithronna and a member of SCBWI and 12x12. She is also a 500-Hour Registered Yoga Instructor. She was a published writer and publicist for ObesityHelp Magazine and non-profit medical facilities. She enjoys writing in her yard in the hills of Pasadena, CA listening to the birds chirp, with her constant companion and very handsome mutt rescue Eugene by her side, when not tutoring at-risk youth.