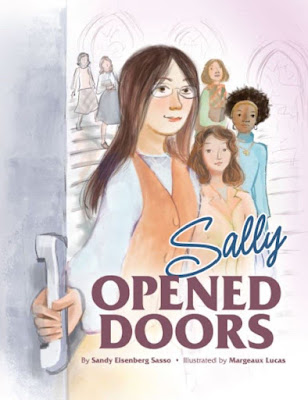 Sally Opened Doors: The Story of the First Woman Rabbi

Young Sally fantasizes about being on the bimah and teaching Torah. In the 1970’s, women were claiming their places in the career world as pilots, doctors and lawyers. Growing up in this era, Sally visualized herself becoming a rabbi in the completely male-dominated field. She was undeterred by the nay-sayers and gatekeepers who couldn’t envision a female rabbi. By age 16, Sally used her admirable chutzpah to inquire about admission to the Hebrew Union College. When she finally received a response, it was neither encouraging nor welcoming. The art shows Sally nonchalantly tossing the letter into the garbage with a smile on her face. Ultimately, Sally gained admission and pursued her study.

Aware of the incredible scrutiny on her as the first female rabbinical candidate, Sally allotted ten minutes for worrying, and then refocused her energies. To the barrage of criticisms, she responded that “if all the space in your head is filled with anger, you have no place for anything else.” While I applaud her steadfast commitment and steely determination, I would’ve liked to see more emotion and vulnerability from the character to convey a sense of her whole person.

Illustrations depict foreground characters in a pale, tasteful palette, with background people in loosely sketched browns, blacks and whites. The art complements the tone of the text, depicting ‘70’s wardrobes and hairstyles.

Sally Opened Doors is well researched and includes additional back matter about Priesand, including her major accomplishment of introducing inclusive God language into the Reform movement. Sally’s life is basically a love letter to Judaism, and her ambitions were born out of true appreciation of the Torah and Judaic traditions. Many Jewish images are shown (although interestingly, Sally never wears a yarmulke). Sally’s trailblazing allowed many girls to envision themselves as rabbis and pursue study. It is noted that there are over 1,000 women rabbis in the world today. This book is a contender for The Sydney Taylor Book Award as it authentically portrays a Jewish person of note who was a game changer for women. Sally’s contributions to Judaism and Jewish women are invaluable. The story’s message is inspiring for all ages and religions. Sally Opened Doors belongs in homes, libraries and schools.

Reviewer Shanna Silva is an award-winning author and Broadway producer. She has written three children’s picture books: A Dog’s Guide to Being Human, Hannah’s Hanukkah Hiccups and Passover Scavenger Hunt. Shanna is also the author of over 45 hi/lo books for emerging readers. Her work has been featured in Kveller, Bella Magazine, Twins Magazine, Multiples Illuminated I and II, and Chicken Soup for the Soul. Shanna lives in New York with her family and a meshuggenah sheepadoodle named Drake.
Apples & Honey Press Biography Margeaux Lucas Picture Books Sandy Eisenberg Sasso Shanna Silva