Review: A Visit to Moscow 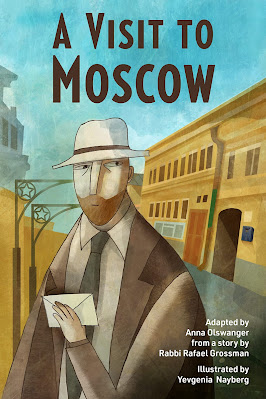 A Visit to Moscow

Adapted by Anna Olswanger from a story by Rabbi Rafael Grossman, illustrated by Yevgenia Nayberg

In the summer of 1965, a group of American rabbis visit the Soviet Union to meet with Soviet Jews. Rabbi Rafael Grossman, a member of the delegation, goes in search of the brother of one of his congregants. He finds a hidden child. Zev is a beautiful and fragile four-year-old boy who peeks out from behind a curtain. He has never been outside. He has never met a stranger. His parents believe that the only way the boy can stay safe and remain Jewish is to avoid the prejudice on the streets and the ostracism in the schools, where Shabbat observance would be impossible and unkosher food would be served. The Rabbi helps the boy and his family emigrate to Israel. That is the central story of this hauntingly illustrated graphic novel for older readers.

The story begins and ends with Zev seemingly flying over the hills and valleys of Israel while he reflects back on the extraordinary circumstances of his life. The illustrations propel the narrative at an achingly evocative pace. Vibrant blues and greens in the opening pages contrast with the muted brown and gray tones of the central story. The hushed palette captures the secretive mood of the Rabbi's family visit. The sharp angles express the jagged experience of Soviet Jews. The juxtapositions of perspectives add to the tension in the encounter between a stranger and a wary, distrustful Soviet Jew. The watchful eyes of the KGB are an unseen character in the story.

It is unclear how much of the story is true. The Rabbi's son says it is a story his father told often from the pulpit and to the press. The author worked with the Rabbi in the 1980s; she cannot discern fact from fiction in her notes. A historical afterword, notes on author and illustrator process, and a letter from the publisher provide context for a story told with love and empathy. The last image in the book is a photograph of Rabbi Grossman in the Soviet Union in the summer of 1965.

I would have preferred to linger longer on the portrait of Jewish life in the Moscow of the 1960s. The allegorical frame is a distraction from the central story that highlights the plight of Soviet Jewry. That story is a precursor to the waves of immigration that were to come in the 1970s and 1990s. A Visit to Moscow may be a useful tool with which to begin discussion of the difficulties and dangers of emigration.

A Visit to Moscow is a beautiful book with many layers of storytelling. That very virtue might make it less accessible to a broad audience, but it is a memorable book worth pondering. 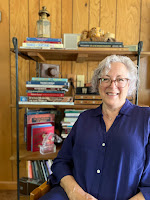 Reviewer Jeanette Brod is the Children's and Teen Services Associate at the New Milford Public Library in Connecticut. She serves as an Educational Consultant at Connecticut’s Voices of Hope HERO Center. Jeanette is the former Director of Lifelong Learning at her local synagogue, Temple Sholom. She holds a Master's degree in Comparative Literature from Indiana University, Bloomington. Jeanette and her husband, Alexander, are the proud parents of two grown children.