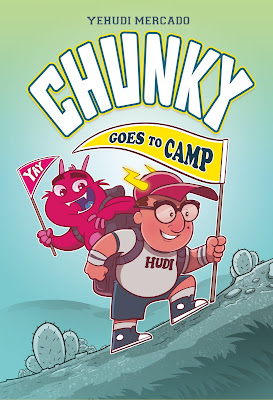 In Chunky Goes to Camp, a semi-autobiographical graphic novel, we follow Hudi, the protagonist of 2021’s Chunky. Hudi is a junior high student with a flair for comedy. Unfortunately, Vice Principal Hyatt doesn't share Hudi's sense of humor. Hyatt decides that since Hudi is Mexican and doesn't "follow the rules," Hudi must be a hoodlum. He accuses Hudi of one “offense” after another and sends Hudi to detention over and over. While we laugh at the absurdity, we also feel outrage against the punitive school discipline depicted.

When the school year ends, Hudi’s parents send him to Camp Green, a Jewish sleepaway camp, to prevent more trouble (although they agree that the administration treated him unfairly). Before Hudi even reaches camp, things get Jewy. There are four friends all named Josh. Camp events and locations are called by Hebrew terms. We see Shabbat celebrations and Jewish sing-a-longs. At first, Hudi is overwhelmed. But then, Hudi discovers another funny Jewish Latino kid at camp – and Pepe can see Hudi's imaginary mascot Chunky, too!

Eventually, Hudi, Pepe, and Chunky end up in a prank war with the four Joshes. Endowed with greater creativity, Hudi’s team is winning–and then Pepe turns out to be not quite as he represented himself. When he pushes Pepe to escalate their pranks, Hudi lands in a heap of trouble yet again.

Chunky Goes to Camp is a fun read with a charming protagonist and positive messages about diversity, empathy, and being open to new experiences. Hudi appears to be a seventh/eighth grader, but I think kids in third grade and up will appreciate his adventures. I thoroughly enjoyed all the references to Jewish culture, in general, and Jewish camp, specifically. (My favorite: they played Gaga at Maccabia games.) Seeing a Jewish sleepaway camp in Texas (rather than in the Northeast U.S.) is refreshing, as is reading a narrative shared by someone who is both Jewish and Mexican. The book is vibrant with the authenticity of lived experience. I did think that the themes of valuing diversity and extending empathy were slightly undermined by the jabs Hudi makes towards his fellow campers during the Talking Marathon, but overall the positive Jewish values in this enjoyable story shine bright.

Reviewer Rebecca Klempner has published five books for Jewish children—most famously A Dozen Daisies for Raizy and Glixman in a Fix. Her newest, Adina at Her Best, became a November 2021 pick for PJ Our Way. Her stories, essays, and articles for adult audiences have appeared in a variety of venues, including Tablet Magazine, The Layers Project Magazine, Jewish Review of Books, The Wisdom Daily, Hevria, Kveller, The Jewish Press, Hamodia and JewishFiction.net. In addition to writing, she has edited several books, including some of the What Should Danny Do? series.
graphic novel Katherine Tegan Books Middle Grade Rebecca Klempner Review Yehudi Mercado