Review: Until the Blueberries Grow 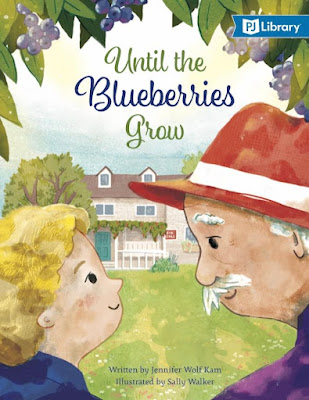 Until the Blueberries Grow

The reader is introduced to Ben and his Zayde, who are best buds. They spend a lot of time together and Zayde appears to be Ben’s primary male role model (the illustrations feature a mom and younger sibling, but no dad). When it’s time for Zayde to downsize and move, Ben is unable to accept this change. He convinces Zayde to delay his plans multiple times. A "for sale" sign subtly shows the reader the status of the move. During the postponement, Ben and Zayde celebrate Sukkot, Hanukkah, and Passover. Interestingly, the larger family is not shown celebrating holidays or spending time together. It’s all about Ben and his smartly dressed Zayde. As time passes, it’s clear that Zayde can’t defer any longer. An ominous illustration of a steep staircase shows the reader what Zayde sees, and how his needs have changed with age. Eventually, he moves into a facility and is visited by Ben, where it shows that both have accepted this change, and that their amazing bond endures.

Nature is prominently featured in the artwork, from the beautiful magnolia tree to the crisp autumn leaves. The color palette is soothing and comfortable, which helps to set the tone for this relatable life cycle event.

Until the Blueberries Grow has both literary merit and positive authentic Jewish content. The opening pages refer to the Ecclesiastes passage “For everything there is a season,” which is both demonstrated by the actual seasons changing and the life cycle events that unfold. Mitzvot of honoring elders and leading with kindness are key to the story. The Jewish content appears to be the experience of an American Ashkenazi family and no ethnic diversity is featured in the artwork. This book meets the criteria for consideration as a Sydney Taylor award candidate. The lesson is that while geography can change, the ties between family are constant. It left me with a nostalgic feeling, remembering the close relationship with my own Grandpa. The book can be enjoyed by all generations of readers, and can be used as an important lesson for kids who are experiencing change.

Reviewer Shanna Silva is an award-winning author and Broadway producer. She has written three children’s picture books: A Dog’s Guide to Being Human, Hannah’s Hanukkah Hiccups and Passover Scavenger Hunt. Shanna is also the author of over 45 hi/lo books for emerging readers. Her work has been featured in Kveller, Bella Magazine, Twins Magazine, Multiples Illuminated I and II, and Chicken Soup for the Soul. Shanna lives in New York with her family and a meshuggenah sheepadoodle named Drake.
Jennifer Wolf Kam Picture Books PJ Publishing Review Sally Walker Shanna Silva