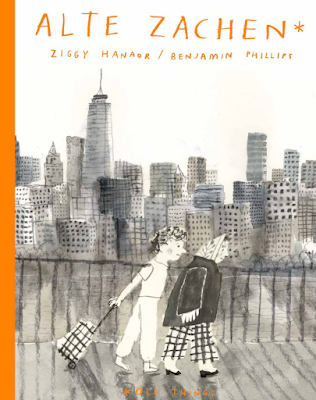 At first, Alte Zachen seems like a story of a stereotypical Bubbe shopping for Shabbat with her grandson, Benji. Bubbe, living in New York City, constantly reprimands Benji for living in the now: bringing reusable shopping bags, not understanding what it means to be Jewish. Benji takes this all in stride; it seems Bubbe is getting forgetful and rude in her old age. She expects time to stand still in 1950s New York City. Bubbe cannot accept that things have changed in the world and keeps throwing in Yiddishisms and stereotypical Jewish ideas. When Bubbe calls the butcher a ganef (thief) after being told brisket is $20 a pound, Benji reminds her that’s what things cost these days. He apologizes to the butcher and everyone else Bubbe is rude to that day.

By the end, it is a warm story between a modern grandson and his aging Bubbe. Benji shows patience and compassion for his grandmother, allowing her to reminisce about the old while they live in the new. Bubbe was forced to flee Germany in the 1930s and that story is woven in well. For example, she sees a tattoo parlor and comments about knowing people with tattoos; a thoughtful illustration accompanies that memory. While riding on the subway she reminisces about the beautiful train she took from Berlin to Switzerland with her mother and sister in 1939. A final stop at the bakery run by a friend from the old days satisfies Bubbe's craving to connect with her past.

The story is imbued with plenty of Ashkenazi Jewish flavor and touches upon many typical Jewish experiences. Alte Zachen will be perfect for kids of all backgrounds to read with their grandparents, who will hopefully share memories of their own.
Are you interested in reviewing books for The Sydney Taylor Shmooze? Click here! 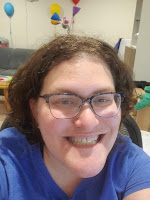 Reviewer Dina Herbert is a librarian for the federal government. She is a past president of the Association of Jewish Libraries and an avid reader. She lives in Northern Virginia with her spouse and two small, well read children.