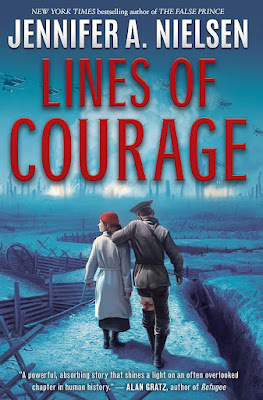 by Jennifer A. Nielsen

Lines of Courage is a sweeping, ambitious middle grade novel about World War I. The book follows young adolescents Felix from Austro-Hungary, Elsa from Germany, Juliette from France, Kara from Britain, and Dmitri from Russia. Their lives criss-cross and overlap in "deus ex machina" kinds of ways—including through a war medal, a knitted hat, a stitched red star, and homing pigeons—and the reader is shown how even people whose countries are at war with each other do not need to be enemies.

The novel begins with Felix Baum witnessing the assassination of crown prince Archduke Franz Ferdinand in Sarajevo. As the war starts and his father, a sergeant in the Austro-Hungarian army, goes off to fight, Felix's hometown of Lemberg becomes occupied by the Russians (who have joined Bosnia against Germany and the Austro-Hungarian empire). As the Russians begin deporting Jews to prison camps, Felix and his mother are in great danger.

Felix escapes from the cruel hands of the Russian Major Garinov with the help of Elsa, the daughter of his father’s German military friend, Major Dressler. Kara, working as an orderly on a Red Cross hospital train in France, helps Felix’s injured father, She also helps Juliette, whose home has become one of the worst battlefields in France and who has become separated from her family. Juliette also helps Dmitri who has been injured on the battlefield and is shell shocked, and Dmitri helps Juliette find her family. Elsa helps Dmitri when he is a German prisoner. Even Major Garinov makes multiple appearances. The novel is sweeping and ambitious in its breadth of time, characters, and historical accuracy and rendering. In some ways, the young teenaged protagonists seem too good, unselfish, and courageous to be realistic, and their criss-crossing connections strain belief. But after considering this for some time I think it serves the story well in that what happens to the characters—what they witness and the staggering destruction, death and challenges they face—would be too harsh to ingest. The slightly softer lens works better in this middle grade novel.

Felix's Jewish identity is an important thread to the story. It sheds light on the plight of many Jews who lived in the Austro-Hungarian empire and fought for the Kaiser, and who were in extra danger when caught up by occupying Russian forces—an aspect of WWI that I, for one, did not know about, nor do I know of any other children’s novel that talks about it. I am uncertain if this one thread is enough to qualify Lines of Courage for a Sydney Taylor Book Award, but I do think it is an award-quality book. It is clear that an enormous amount of meticulous research went into the writing of Nielsen’s book and it serves better than anything else I’ve read (for children or adults!) to elucidate the different aspects of WWI and how it affected the people on whose land it was being fought. It certainly is an important addition to any school and public library, as well as the private bookshelf.
Are you interested in reviewing books for The Sydney Taylor Shmooze? Click here!

Reviewer Meira Drazin’s debut middle grade novel HONEY AND ME was a recipient of the Sydney Taylor Manuscript Award and is forthcoming from Scholastic Press on October 18th, 2022. She reads widely in many genres, but in particular middle grade and YA, and she is a strong advocate for Jewish education, both formal and informal. She has been a freelance writer for Jewish media and parenting magazines and has an MA in English and Comparative Literature. Originally from Toronto, Meira lived in New York for many years and now lives in London with her husband and four children. She blogs about middle grade books and publishing at https://fromthemixedupfiles.com/.