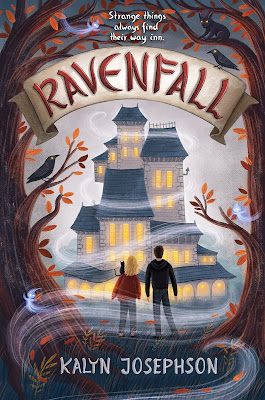 Annabella Ballinkay is a 13-year-old girl with the ability to -- with a single touch -- see deaths which have been witnessed by others. Each member of her family has their own magical ability. She lives at her family's inn, Ravenfall, which sits at a spot in Oregon where the Shield guarding the "normal" world from the Otherworld is thin enough for magic and magical beings to spill over.

Shortly before Samhain, 14-year-old Colin Pierce shows up at Ravenfall. He's been on the run from the murderers of his parents for weeks. Since he's been separated from his older brother, Liam, Colin follows the directions he'd received for such an eventuality: go to Ravenfall and wait for Liam to arrive. Newly introduced to the world of magic, Colin soon learns that he's a Raven, a guardian of the Shield. Anna and her family teach him about the magical world and prepare him for the confrontation with his parents' murderers, villains who seek to do far more damage in the future.

While the first chapter didn't really pull me in, once it got going, the story moved at a brisk pace. Although the characterization is not deep, Anna and Colin become heroes that kid readers can identify with. As a reader, I would have appreciated more explanation of the magic in the book. Fans of "spooky" media -- shows like "Supernatural" and "Buffy," for example -- will likely enjoy the autumnal Halloween and Samhain mood of this book, as will a lot of middle-grade readers who enjoy fantasy adventures like Fablehaven by Brandon Mull.
The Jewish content of Ravenfall is casual in nature: a main character who is half-Jewish briefly reminiscing about a meal in a sukkah, casual mention of dybbukim, a character wearing a magen david around her neck, etc. Judaism doesn't seem to influence the plot or characters, nor is it set in a Jewishly cultural or historical context. It's also an interesting book in that while there are these little teases of Jewishness here and there, there's also a lot about non-Jewish practices which might make some Jewish readers uncomfortable.

The mention of Sukkot is interesting, as the nostalgic memory is positive but is paired with the idea that the character's father's Jewish family isn't really in touch anymore, which I'd describe as a negative reflection. Her Jewish father also travels so much he's not really present on page.
Not a likely candidate for the Sydney Taylor Book Award, but a good option for middle grade fantasy fans.
Are you interested in reviewing books for The Sydney Taylor Shmooze? Click here!

Reviewer Rebecca Klempner writes and edits from sunny Los Angeles. Her stories, reviews, articles, and essays have appeared in diverse Jewish outlets, and her books include A DOZEN DAISIES FOR RAIZY, GLIXMAN IN A FIX, and ADINA AT HER BEST. ADINA AT HER BEST was included in the PJ Our Way program in November 2021. Rebecca's next book is expected to be a sci-fi, Jewish picture book due out with Kalaniot Books in Fall 2023.