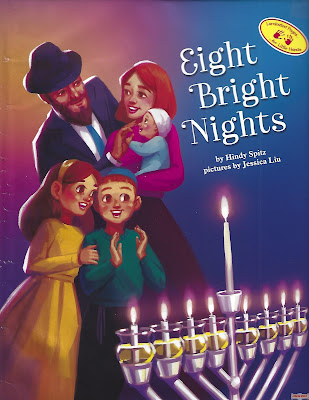 Category: Picture Books
Reviewer: Jeff Gottesfeld
With all the attention on diversity in children's books in general, and here at the Shmooze on Jewish books in particular, the fact remains that Orthodox Jewish practice is generally underrepresented...no matter the identity characteristics of the adherents. Attention must be paid, as Arthur Miller said, particularly because it is projected that by 2060, Orthodox Judaism will be the largest Jewish denomination in America. It's a way of life with consistency; that way of life is beautifully reflected in Hindy Spitz's book about Chanukah, Eight Bright Nights, with accurate, authentic, and often touching art by Jessica Liu.

Chanukah -- that's the spelling Spitz adopts -- is a minor festival on the calendar. Spitz takes us through it in charming rhyme, never overestimating the holiday's importance (boosted for many of us by its calendar placement), and never overestimating core Orthodox practices -- religious practices and principles -- associated with it. To that end, the miracle of the extended oil burning is properly attributed to Hashem, and one of Liu's art depiction makes it clear that the menorah that was rekindled in Temple after the successful rebellion was seven-branched, not eight. (As with so many kids' books about this holiday, the less kid-appropriate aspects of the Maccabean rebellion are omitted).

The Chanukah of Eight Bright Nights is no gift-fest, or competition with Christmas. It's a girl at the piano playing and singing (maybe Maoz Tzur?) while a grandparent looks on, an apparently multiracial Orthodox extended family gathering, Dad cooking latkes, and kids getting a few dollars as a present with the presence of a tzedakah box and a textual admonition that first comes charity. The men and boys sport tzizzit and kipot, and the mom guides a child in the lighting. Liu even finds a way to reflect the halachic order of candle-lighting, when there's more than one candle to be kindled.

Spitz takes us on an Orthodox -- I'm guessing Ashkenazic, from the art -- frum journey through the eight nights of Chanukah. Some of us might love it from the start, but I'm guessing most will by the end.

It's accurate. It's authentic. It's engaging. It's going to be read again and again. This is a Sydney Taylor Book Award contender.

Reviewer Jeff Gottesfeld has written in genres ranging from television soap operas to the stage to teen fiction. Since 2016, and the publication of THE TREE IN THE COURTYARD (Knopf), he has focused on picture book manuscripts. His NO STEPS BEHIND (Creston, 2020) was a National Jewish Book Award runner-up; his THE CHRISTMAS MITZVAH (Creston, 2021) was a Sydney Taylor Honor book. Coming in 2023 is FOOD FOR HOPE (Creston), with illustrations by Michelle Agatha, a faith-based and inspired story of the birth of the world food bank movement, in Phoenix AZ in the 1960s.
HaChai Hanukkah Hindy Spitz Jeff Gottesfeld Jessica Liu Picture Books Review