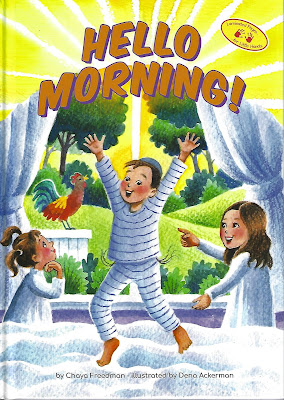 Category: Picture Books
Reviewer: Chava Pinchuck
The prayer "Modeh Ani" (I thank; I acknowledge) is the first thing that Jews say when they wake up in the morning, and this cheery book shows everyone waking up in a great mood and ready to do mitzvot. Dena Ackerman's accurate and authentic illustrations are colorful and classic for a book from an Orthodox publisher, and they set the mood well. They show a household awakening and doing morning rituals: washing negel vasser and putting on tzitzit. There are birds and animals ready to greet the morning in their own way, too. For the most part, the simple rhymes work well (though "Now to Hashem I will say 'Thank You!'" is a little awkward) and include a transliteration of the Hebrew. A note to parents and teachers at the end explains the significance and importance of the prayer. The last page of the book includes Modeh Ani in Hebrew, with English transliteration, and in English translation, which is slightly different than how the words are translated in the rhyming pairs. Modeh Ani: A Good Morning Book by Sarah Gershman and Kristina Warner, the 2011 Sydney Taylor Book Award Winner for Younger Readers, is still the gold standard, but this one is well-suited to children who are just learning to say Modeh Ani. God's name is not mentioned in the prayer; Hashem is used in the book as the recipient of thanks.
Are you interested in reviewing books for The Sydney Taylor Shmooze? Click here!

Reviewer Chava (Kathe) Pinchuck worked in private and public libraries in New Jersey before making aliyah in 2012. In Israel she has worked as a cataloger of legal documents and a cybrarian for a distance learning institution. She is a past chair of the Sydney Taylor Book Award Committee, and a past co-editor of the Children's and YA Book Reviews for AJL News and Reviews. Currently, she is the editor of the Jewish Values Finder, a database of Jewish children's books and a co-administrator of the Sydney Taylor Shmooze.