Review: The Life and Crimes of Hoodie Rosen 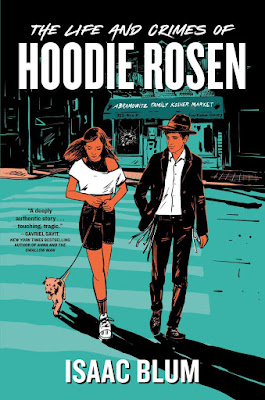 The Life and Crimes of Hoodie Rosen

The Life and Crimes of Hoodie Rosen opens with a flashback during the Jewish holiday of Tu B’Av, where the protagonist and narrator, Yehuda “Hoodie” Rosen proceeds to explain to the reader the first steps toward his ruination. Quickly, the reader is dropped into Hoodie’s world with long days of study at the Yeshiva. Right away, Hoodie’s sharp wit and sense of humor engages the reader, as he admires and characterizes his best friend, Moshe Tzvi, as someone who “makes you feel like an ignorant schmuck,” because of his Talmudic knowledge and acumen in text study and argumentation.

While taking a walk during a break from his studies at the Yeshiva, Hoodie meets the captivating Anna-Marie Diaz-O’Leary, a gentile girl who also happens to be the mayor’s daughter. A forbidden friendship and affection ensues, where Hoodie crosses the boundaries of his expected conduct. To add to Hoodie’s inner conflict, he is navigating a friendship with the enemy. Hoodie's tight-knit Orthodox community has recently relocated en masse from Colwyn to Tregaron, and the local city council has blocked their request for a zoning permit to build affordable housing for their members. Anna-Marie's mom, the mayor of Tregaron, stands in the way of Hoodie's dad, leader of the development project. Tensions are high between the long time Tregaron residents and the new Jewish community.
When Jewish graves in the local cemetery are defaced with swastika graffitti, Hoodie and Anna-Marie join forces to scrub the stones clean. However,  instead of being seen as a mitzvah, Hoodie's behavior is reviled for his inappropriate interactions with a gentile girl. Antisemitic incidents are on the rise in Tregaron, as we see when a group of youths harasses and harms community members. As Hoodie’s interactions with Anna-Marie continue, he begins to question the value in his way of life. In the background, his oldest sister Zippy serves both as his advocate and someone who challenges him to consider the tipping point of his choices and actions. The antisemitism escalates into a terrible scene of violence, leading to Hoodie’s return from his cherem or excommunication.

Longlisted for the 2022 National Book Award for Young People’s Literature, the cover of the book is quite frankly, a trailblazer in Jewish representation with its depiction of Hoodie in his black hat and tzitzits. Blum not only weaves in boyhood humor and antics, he also naturally includes Jewish history, like the significance of spittoons in synagogues. As readers, we witness Hoodie’s daily Jewish life, from prayer to text study, observances of kashrut, and keeping the sabbath. Like any teen, Hoodie questions his identity and how he fits into the complex world around him. Surprisingly, Blum does not include a glossary, and I suspect that non-Jewish readers will struggle with some of the vocabulary and concepts, even though much of its meaning is embedded within the story. While this book is labeled as YA, Hoodie as a character feels younger, due to his lack of worldliness. This book would appeal to upper middle grade readers; however, the culminating violent scene may keep this title in the YA band.

The Life and Crimes of Hoodie Rosen is a strong contender for the Sydney Taylor Book Award. It's a strong window and mirror book, and many Jewish youth will be delighted to discover Hoodie’s journey and the story’s Jewish representation.

Reviewer Sarah Blattner is a high school English teacher in Portland, Oregon, and she has been in and around the middle and high school classrooms for over 20 years, both in Jewish Day Schools and public schools. She is also an aspiring young adult author, drawing inspiration from her joyful summers at Jewish sleepaway camp, leadership experiences in the B’nai B’rith Youth Organization, her childhood in Pittsburgh, Pennsylvania, and her clever students. She has been a member of the Society of Children’s Book Writers and Illustrators since 2008.
Isaac Blum Orthodox Philomel Review Sarah Blattner Young Adult