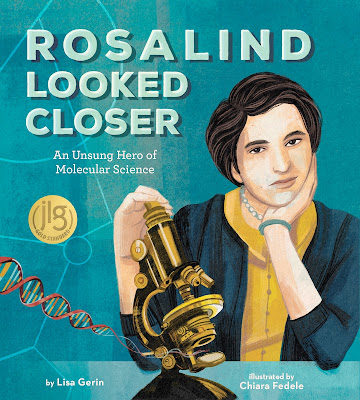 Category: Picture Books
Reviewer: Karin Fisher-Golton
Buy at Bookshop.org
Rosalind Looked Closer follows the childhood, education, and accomplishments of British Jewish scientist Rosalind Franklin, who lived in the early- to mid-twentieth century. This narrative nonfiction book has a length and complexity that make it a good fit for the older end of the picture book audience.
Lisa Gerin’s text shows how a little girl with interest in science can overcome obstacles and develop into a woman whose research impacts the world. The repeating refrain “Rosalind always took a closer look” is fitting for both Rosalind’s passion as a scientist and for her accomplishment of capturing the first images of DNA, something that she was not credited for because she was a woman. The story effectively shows how Rosalind, and all scientists, can positively impact the world. A backmatter section meaningfully relates the legacy of her work to the development of today’s COVID vaccines.
Chiara Fedele’s illustrations are an effective mix of concrete and abstract to portray both Rosalind’s life and the microscopic topics of her research.

The story mentions that Rosalind is the only Jewish girl at her boarding school. It also touches on the dire situation of World War II, but does not relate it to Rosalind’s life other than noting that “Rosalind and her four siblings realized how lucky they were living in England where Jewish people were protected” and describing Rosalind’s work on gas masks for the war effort. This is probably not enough connection to the Jewish experience to qualify the book for a Sydney Taylor Book Award.

What makes the book more notable in Jewish representation, but again probably not for an award, is that the illustrations show Rosalind’s Ashkenazi Jewish punim (face). While nothing should be remarkable about depicting someone accurately, I notice that in illustrations of some Ashkenazi Jewish women, features become a little pointier and hair a little lighter than the subjects’ actually were. It’s good to see a close portrayal of the face of this accomplished scientist.

Rosalind Looked Closer is an excellent STEM picture book example of a young person overcoming societal obstacles, pursuing dreams, and creating a real impact on the world. School librarians, classroom teachers, and children with interest in science will all appreciate the details and inspiration in this book. 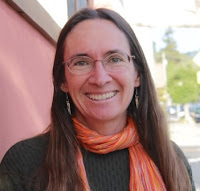 Reviewer Karin Fisher-Golton is a freelance children’s book editor and the author of the board book My Amazing Day: A Celebration of Wonder and Gratitude; retellings of folktales for a reading program; and poems in several anthologies. She is a member of the Board of Advisors for Multicultural Children’s Book Day. Read more about her work at www.karinfisher-golton.com.
Beaming Books Biography Chiara Fedele Karin Fisher-Golton Lisa Gerin Picture Books Review