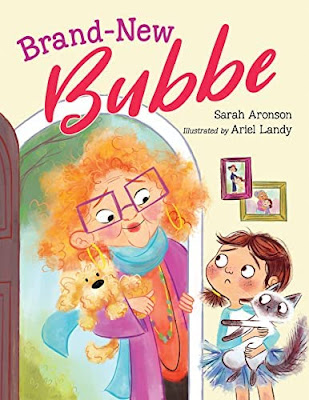 In Brand-New Bubbe, a non-Jewish youngster's mother remarries. Jillian appreciates her Jewish stepfather, but is skeptical--at first--of her new step-grandmother, called by the traditional Eastern Yiddish moniker, "Bubbe." With an orange Jewfro and offers of matzah ball soup and exuberant affection, Bubbe is just too intense for Jillian's taste. Plus, she already has two grandmothers! Jillian stages a protest, refusing the generous gifts and attentions of Bubbe. Mom reminds her child that "Family is more than blood," and tells Jillian to be more welcoming of Bubbe.

On Bubbe's next visit, she asks for Jillian's help to make matzah ball soup. As she explains the correct technique for fluffy matzah balls, Bubbe tells Jillian that her own bubbes taught her to make matzah ball soup. After Jillian tastes the soup, she decides Bubbe isn't too bad. Jillian is nonetheless conflicted--what about her original grandmothers? Not wanting to leave them out, Jillian invites them, plus a great-grandmother, to a special soup party.

The feelings Jillian espouses feel like accurate representations of how a child in her situation would react. While the depiction of a blended family is much needed in Jewish kidlit and the ending is heart-warming, I would also have liked a brief reflection of consent vis a vis unwanted smooches, perhaps with a parent reminding Bubbe that Jillian is allowed to refuse them.

The playful illustrations capture the somewhat over-the-top personality of Bubbe well. The illustrator accomplished this by using a brighter palette and chaotic energy for Bubbe, while other parts of the pictures remain more sedate.

Brand-New Bubbe differs from most Jewish picture books in that although the author is Jewish, the protagonist is not. There are several elements of North American Ashkenazi Jewish culture, although none of Jewish religion, in this book. Even though many Jewish grandmothers do indeed wear lots of makeup and can be clingy and may make matzah ball soup, the depiction of Bubbe in Brand-New Bubbe feels a little more like Linda Richmond (of Saturday Night Live fame) than a real Jewish grandmother. Because of the culture clash, it makes sense that Jillian may at first embrace this shallow perception of Bubbe. However, I found myself wishing for more than a stereotype of a middle-aged Ashkenazi Jewess by the end, once Jillian has formed a genuine bond with her bubbe.

Ultimately, though, this is a positive portrayal. Jillian decides her Jewish step-grandmother has a place in her mixed-ethnicity family. The book certainly reflects contemporary Jewish life (remarriages, interfaith families, and so on). It will surely be welcome on many bookshelves.

Reviewer Rebecca Klempner is an author, developmental editor, and copyeditor living in Los Angeles with her husband and children. Dozens of her stories, essays, reviews, and articles have appeared in magazines and on websites. Her books include Adina at Her Best, A Dozen Daisies for Raizy, and Glixman in a Fix. Rebecca's next title--a Jewish, sci-fi picture book--will be published in 2023 by Kalaniot Books.
Ariel Landy Charlesbridge Picture Books Rebecca Klempner Review Sarah Aronson