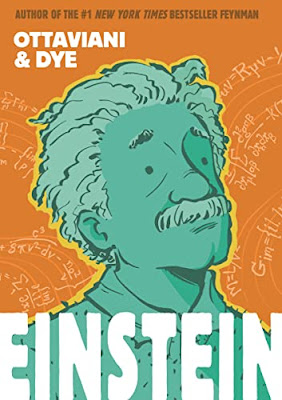 Einstein, a new graphic novel by Jim Ottaviani, illustrated by Jerel Dye, (with coloring by Alison Acton), opens in Hollywood. Albert Einstein, along with his second wife, Elsa, is seen entering the premiere of “City Lights, A Comedy in Pantomime” alongside Charlie Chaplin. The crowd recognizes Einstein and breaks out in applause. Einstein says to Chaplin, “We are just walking. Why are they applauding?” Chaplin responds, “They cheer you because none of them understands you. They cheer me because they understand me. It doesn’t mean anything, but in time you get used to it.”

Einstein begins with his celebrity, then quickly fades, like a film, to the full span of his life and career as one of the most important scientists and political figures of our time. As his wife tells Chaplin and the reader, all of his life, Einstein straddled two worlds - the world inside his head, and where the rest of us reside.

The graphic novel is told from the point of view of those in Einstein’s circle, including his family, colleagues, and rivals. The common narrative theme relates the story of an original thinker preoccupied with big ideas, who changed our world. The book includes and touches on the more familiar aspects of Einstein’s life, such as his well-known trouble in school, his musical accomplishments on the piano and violin, and his path to scientific fame. The book also sheds light on Einstein’s personal life, including his many romantic relationships, and his long struggle and eventual success in the complicated and competitive field of physics.

Little of Einstein’s Jewishness is mentioned until almost halfway through the book, and speaks to his family’s being among the pre-World War I and World War II Jewish-German assimilated middle class. The reader is introduced to how antisemitism has begun to infiltrate all aspects of German society with a rival physicist’s dismissal of Einstein’s achievements as “Jewish Science.” It is against this backdrop that the reader begins to experience Einstein as an outspoken proponent of democracy; views that pit him against rising nationalism and which compel him to leave Europe for America, where his political stance, and his science, were more than welcome. Not a religious person, Einstein was an avowed Zionist, and decided, that “if he was going to be attacked for being a Jew, he might as well embrace it. And capitalize. It was America, after all.”

Clearly intended for a young adult or adult reader, Einstein is comprehensive. The sepia-toned illustrations are cinematic with a projector-like detail that flows with a non-linear impact, much the same as Einstein’s complicated mind and life unfolded.

Einstein adds to the canon of literature on the scientific giant and weaves his Zionism and his anti-fascist views into the scientific narrative. The book is highly detailed, accurate, and appropriate for the intended audience.