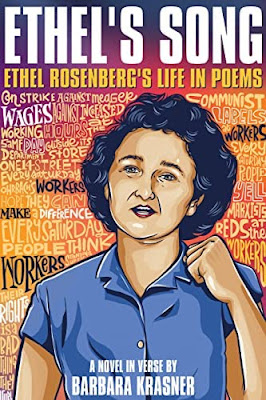 Category: Young Adult
Reviewer: Sarah Blattner
Buy at Bookshop.org
Ethel's Song is a collection of poems telling the story of Ethel and Julius Rosenberg, the notorious Jewish couple who were electrocuted in 1953 after being charged and later convicted for conspiracy to commit espionage by leaking atom bomb secrets to the Soviets. Ethel Greenglass’ story begins as a young girl in tenement housing on the Lower East Side of New York City, where her mother parented harshly and her father toiled over his sewing machine repairs. As a girl, Ethel dreamed of being an actress, and as a youth, she fell in love with singing. Ethel quickly put aside her girlish dreams to help support her family, working as a typist and later as a stenographer. Ethel turned to the fight for workers’ rights and found a like minded companion in Julius Rosenberg. Ethel and Julius later married, started a family, and took up the fight for workers’ rights, and later, the fight against fascism. Julie, a full member of the Communist party, used his charisma and art of Hebrew text study argumentation to recruit members and lead the cause, while Ethel typed notes for the Communist party. With the rise of McCarthyism rooting out Communists and with J. Edgar Hoover’s F.B.I. hunting for a foreign spy ring, the Rosenbergs were bound to come under malicious scrutiny. Sealing the Rosenberg’s guilt, Ethel’s beloved brother Dovey, an engineer who worked on a secret government project, cut a deal with the prosecutor to save himself and his wife, and he later admitted to perjury at the trial, thinking that Ethel and Julius would eventually speak out for their innocence.

Author Barbara Krasner humanizes the Rosenbergs by portraying them as the loving couple they were, “...trying to make their way and live consistently with their values.” The author’s notes give carefully researched details about the Rosenberg case and their children, Michael and Robby, including what happened to them as youths and how they grew into adulthood to carry the mantle of the family heritage, correcting the historical record and educating the public. One liberty that Krasner takes with Ethel's story is her wearing red lipstick. This motif is threaded throughout the story as a symbol of a rebellious youth at first, and then later a symbol of the Communist cause and fight against fascism. Another motif is the mention of the Passover seder’s four questions in a series of poems throughout the text—each one taking up themes reflecting Ethel’s struggle and perspectives on life, including poverty, hate, war, and politics. The book also includes original photographs of the Rosenbergs and their children, as well as a historical timeline and selected bibliography. The poems reveal the author’s precision, crafting with lean language and poetic devices. Additional Jewish connections in this story include the observance of Shabbat, a bris, and the familiar story of Eastern European Jewish immigrants striving on the Lower East Side of New York City. Yiddish expressions are peppered throughout the text, and the author also chooses to refer to “G-d” with a respectful G dash d. Ultimately, Ethel is portrayed as a loving Jewish mother who wants the best for her boys, even when the world turns on her and Julius. Ethel's Song: Ethel Rosenberg's Life in Poems is a contender for the Sydney Taylor Book Award, shedding light on the true story of the Rosenbergs.

Reviewer Sarah Blattner is a high school English teacher in Portland, Oregon, and she has been in and around the middle and high school classrooms for over 20 years, both in Jewish Day Schools and public schools. She is also an aspiring young adult author, drawing inspiration from her joyful summers at Jewish sleepaway camp, leadership experiences in the B’nai B’rith Youth Organization, her childhood in Pittsburgh, Pennsylvania, and her clever students. She has been a member of the Society of Children’s Book Writers and Illustrators since 2008.
Barbara Krasner Calkins Creek Review Sarah Blattner Young Adult