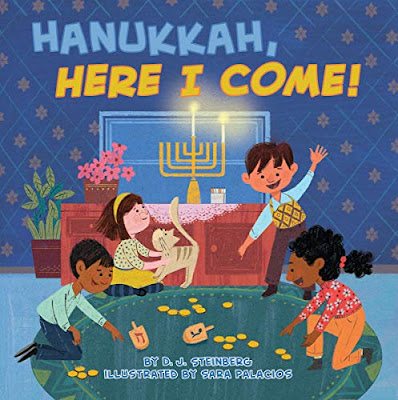 The Grosset & Dunlap series gets a peppy, diverse, and fun addition to its collection with this book about Hanukah. Or Chanukah. Or Hanukkah, as this book is entitled. One of the challenges of the holiday for authors is how to spell it in transliteration, so it can be searched for correctly. But I digress. This title has a lot going for it, for both Jewish and secular families. Hanukkah (I'll use the author's spelling) is unpacked in funny and engaging four-line rhyming poems, accompanied by energetic artwork. Everything from an ultra-shortened and ultra-sanitized-for-children history of the rebellions of the Maccabees (not exactly the story of Maccabees 1 and 2), to anticipation of good presents, to the intricacies of playing dreidel, to Team Applesauce or Team Sour Cream for latkes, to the explosion of powdered sugar in a bite of a jelly doughnut is covered, with good humor and occasional laugh-aloud poetry. Artist Palacios is similarly funny - the failed attempts by the family at a hanukkiah selfie is worth a second look. I could quibble with some choices of language, but that's just me. The bigger omission is any concept of God, for a religious holiday. Religious miracles don't just happen, as the rabbis of the Talmud who created the oil restoration story would surely argue. With all that said, the mood of the art and book is positive, exciting, and pure fun, with Palacios' art right in there with the stance that we Jews are remarkably diverse in our appearance. I think this book is going to be widely read, and deservedly so.

There is plenty of Jewish content, obviously, and it is depicted with accuracy and specificity. The art works beautifully with the text, and the diversity of Judaism's adherents is clear. The families and people all seem to read as non-Orthodox, so less diversity in that regard. And the spread of the first night looking into the windows of many homes at once, is Jewishly really touching. It's a Sydney Taylor contender, surely.

Reviewer Jeff Gottesfeld writes in multiple genres, and most recently has focused on picture book manuscripts for children. His recent titles are TWENTY-ONE STEPS (Candlewick, 2021), and THE CHRISTMAS MITZVAH (Creston, 2021), a Sydney Taylor Award honor winner. Next up is FOOD FOR HOPE (Creston, 2023), illustrated by Michelle Agatha (illustrator of THE CHRISTMAS MITZVAH), a picture book biography of the highly unlikely founder of the world food bank movement, John van Hengel, the former golden boy who found himself on a soup kitchen line in Phoenix, Arizona in the mid-1960s.
D.J. Steinberg Grosset & Dunlap Hanukkah Jeff Gottesfeld Picture Books Review Sara Palacios