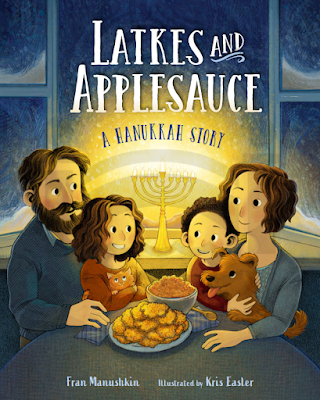 Latkes and Applesauce: A Hanukkah Story

In this charmingly old-fashioned Hanukkah story, the Menashe family is accustomed to celebrating the holiday with potatoes for making latkes and apples for making applesauce. But this year, that’s impossible. An early winter snowstorm has buried the still-in-the-ground potatoes under mounds of snow. That same storm also prevents the family from gathering still-on-the-tree apples. Everyone is hungry! Worse, two strays - a hungry cat and a hungry dog come in search of food and shelter. There’s no food for anyone. Nevertheless, the Menashe family – sharing Talmudic-sounding wisdom – helps the animals. After all, the dog and cat are God’s creatures. Yet, still, it snows.
Finally, on the last night of Hanukkah, the sky clears, the snow stops, and everyone goes outside. The dog digs in the snow…and finds potatoes. The cat climbs the tree…and Papa, climbing after the cat, finds apples. Returning inside, the children finally give names to the dog and cat – Latkes and Applesauce.
This story has been significantly abridged and tightened up from its earlier version (it was originally published in 1989 with illustrations by Robin Spowart). Kris Easler's sweet illustrations portray a loving family, but the modern dress and home of our heroes seem at odds with the old fashioned text and dialogue. The book opens "Long ago in a village far away...." Both Mama and bearded Papa shares tidbits of wisdom like "a cat is one of God’s creatures" and "a name should fit as well as a glove." Also, it seems unlikely that a modern family would rely on growing their own potatoes and apples.
Putting aside these inconsistencies, this is a lovely old-fashioned read, with a mid-20th-century Jewish flavor, about kindness to animals and enjoying the happy holiday of Hanukah. Recommended for snowy Hanukkah nights. Delicious accompanied by latkes and applesauce.

Award-winning author of almost two dozen fiction and non-fiction picture books, reviewer Linda Elovitz Marshall grew up in New England, then studied cultural anthropology at Barnard College/Columbia University. She’s taught preschool, consulted for NYS Dept of Education, pursued a Ph.D. in Anthropology, owned an indie bookstore, and raised her family as well as chickens, rabbits, a small flock of sheep in a 200-year-old farmhouse on the Hudson River. In addition to spending time with her family and writing, Linda loves hiking, swimming, traveling, and finding beauty in unexpected places.