Review: Nothing Sung and Nothing Spoken 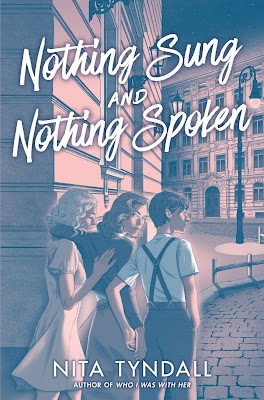 Nothing Sung and Nothing Spoken

Category: Young Adult
Reviewer: Dena Bach
Buy at Bookshop.org
In the summer before World War II begins, Charlotte “Charlie” Kraus, chafing under Hitler’s regulations, follows her best friend Angelika, “Geli,” the daughter of a Nazi officer, to a forbidden, hidden dance club. Despite their complicated feelings for each other, Charlie and Geli feel the thrill and freedom of dancing to the “degenerate” jazz music played there. As their lives in Berlin become more restricted, Charlie and Geli, along with friends Renate and Minna, find a kind of resistance to the Nazi regime by joining the “Swingjugend” movement. Historically, these groups of mostly middle- or upper-class teens, in opposition to Nazi policies, would dance in private homes or clubs to banned American music while dressed like the British and Americans. These clubs were a response to the “Hitlerjugend,” Hitler Youth groups, that those deemed Aryan were obliged to join. Going to the Swingjugend clubs is risky for Charlie and Geli, but for those who are not Aryan enough, like Renate, who is deaf in one ear, and Minna who is Jewish, these activities become even more dangerous. Also dangerous is Charlie and Geli’s love for each other. As the war begins, because of her father’s position, Geli finds resistance difficult, and she and Charlie grow apart. When Charlie starts a relationship with Renate, she finds even more ways to resist the regime. The tragic ending of the story, when Charlie and Geli encounter each other at a Swingjugend club just before it is raided, speaks to the many losses of WWII.

This first-person narrative, seen through the non-Jewish Charlie’s eyes, is a compelling, moving story of the life of a queer teen in Hitler’s Germany. Even the cover illustration draws us in, with Charlie’s challenging look aimed directly at the reader. However, the book is limited as a Jewish story, and is therefore less than ideal as a contender for the Sydney Taylor Book Award. The inclusion of the Jewish Minna and her family in the story is understandable, as it is hard to speak of the oppression of the Nazi regime without including Jewish characters. However, after Kristallnacht, when Minna and her family leave for relative safety in France, she becomes less an integral part of the story, and instead a way of demonstrating the evil of the regime and the empathy shown by Charlie and her family and friends. Of interest to queer teens and their allies, Nothing Sung and Nothing Spoken can be used as a springboard for discussions about complicity and resistance in today’s complicated world.

Reviewer Dena Bach studied Illustration at the Massachusetts College of Art and Design and has an MA/MFA in Children’s Literature and Writing for Children from Simmons University. She has worked as a fine artist, calligrapher, illustrator, art director, writer, bookkeeper, bookseller, and a teacher of children from ages 2 to14. No matter how many children’s books she reads a day, the magical pile of books on her bedside table never seems to get any smaller.
Dena Bach HarperTeen Holocaust LGBTQIAA+ Nita Tyndall Review Young Adult