Review: We Survived the Holocaust 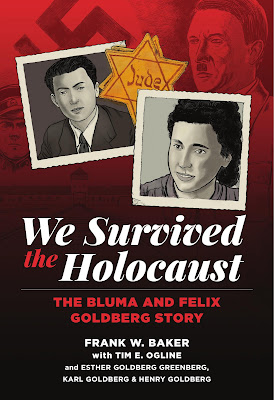 We Survived the Holocaust: The Bluma and Felix Goldberg Story

Category: Young Adult
Reviewer: Lisa Trank
Buy at Bookshop.org
The field of graphic novels often covers difficult topics through a delicate balance of the visual and the word. In the world of Jewish literature, graphic novels provide a unique way to tell the story of the Holocaust to a wide range of audiences, and in particular, younger readers.

The graphic novel We Survived the Holocaust by Frank W. Baker and Tim E. Ogline began with a simple request. “Frankie, do something with this,” Felix Goldberg said, handing the author the speech he’d just delivered to their South Carolina synagogue on Yom Hashoah in 2000. Baker, a lifelong friend of the Goldbergs, worked with the family to create www.storiesofsurvival.org, a website dedicated to the Goldbergs' life before, during, and after World War II, and their life in South Carolina. However, after realizing that an entire generation of young people have little or no knowledge of the Holocaust, Baker was compelled to do more. We Survived the Holocaust, the graphic novel, was born.

With highly stylized and journalistic drawings, including references to antisemitic propaganda images, We Survived The Holocaust illluminates how the personal, historical, and political collide. Starting in 1917 and 1926 with Felix Goldberg and Bluma (Tishgarten) Goldberg’s beginnings in Poland, the reader is transported into an era of intense political and historical unrest, and the atmosphere which planted the seeds for the rise of Adolph Hitler and the Third Reich. The drawings provide a rich context of the thriving Jewish communities caught in the crossfire of war, economic hardship, bigotry, and the widespread hatred taking hold. This is poignantly shown with a drawing of the Goldberg’s family mezuzah being pried off the door, as it had become unsafe for any Jewish family to openly display their Judaism. [Illustration Editor Dena Bach adds: This particular mezuzah, though the Hebrew letters in the illustration are not quite accurate, adds an extra layer of meaning in this potent symbol. The quote on the case, from Deuteronomy 28:6, "Blessed are you in coming in, blessed are you in going out," is from a chapter about the rewards of faithfully following the commandments.]

Broken into sections, the powerful imagery and storytelling encompass the entirety of Felix and Bluma’s lives, from their separate and harrowing journeys to their eventual meeting at the Landsberg Displaced Persons camp, where they fall in love, get married, and give birth to the first of three children.

Comprehensive and unflinching, We Survived the Holocaust is a testament of an horrific time, but also imparts that the Holocaust is not Bluma and Felix’s full story. The book does not end at liberation; it shows the post-war life they built in South Carolina as successful immigrants and prominent members of the Jewish community. The mezuzah imagery is returned to at the end, emphasizing to readers that despite everything the Goldbergs endured, their Jewish faith, and life, survived with resilience and purpose.

We Survived the Holocaust begins with thought-provoking questions to consider throughout the book and ends with a direct appeal from Bluma and Felix, who appeal to readers to continue their legacy of remembering. For the Goldbergs, and future generations, “never forget” must be more than a slogan. It must become every person’s responsibility.

We Survived the Holocaust would be a powerful and impactful teaching tool for high school students and does have triggering imagery.

The book meets the Sydney Taylor Book Award criteria, especially because it stresses that the Holocaust is part of the Jewish story, not the entire story.

Reviewer Lisa Trank is a Longmont, Colorado based children's book and freelance writer with a focus on Jewish-themed stories, articles, and profiles. She is a member of SCBWI and serves as Assistant Regional Advisor for the Rocky Mountain Chapter.