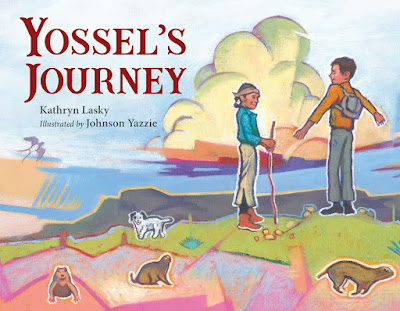 Category: Picture Books
Reviewer: Heidi Rabinowitz
Buy at Bookshop.org
Yossel's family leaves Tsarist Russia because of anti-Jewish violence, traveling to the fictional Two Red Hills Navajo reservation in New Mexico where Uncle Izzy has left them a trading post. Shy and feeling displaced, it takes a while for Yossel to warm up to his new home. When he meets Thomas, a Navajo boy his age, he comes out of his shell and the two become friends. Yossel finally feels at home when he tells a chicken joke that had been a hit with his friend Moishe back in Russia, and Thomas's family gets it. He's especially pleased that his joke caused Thomas's baby brother's first laugh, a significant event in Navajo culture.
Johnson Yazzie's stylized acrylic paintings, with their earth tones and wide open skies, make every setting (from Russia to New York to New Mexico) evoke a southwestern flavor. White outlines bring characters forward, giving even the action scenes a sort of static dignity that befits the spare text.

From the title to the first person narration, the story centers Yossel's experience, but Thomas and his family seem to be portrayed respectfully and without stereotyping. I do wonder about the line "He shows me where the ghosts of Navajos live," but my hope is that Navajo illustrator Yazzie would have spoken up if this were problematic. The Ashkenazi Jewish representation feels authentic, with Mama making honey cake for "the Sabbath" (interestingly, not "Shabbos") and blintzes. Yossel eats non-kosher chicken with Thomas's family, but this is likely realistic, as keeping kosher was extremely difficult for Jews in the 19th century southwest. An author's note gives more background about Jews (and crypto-Jews) in the southwest, and a reading list offers additional Jewish fiction by Lasky as well as nonfiction on Jews in the southwest.

Ironically, no mention is made of the parallels between the displacement of Jews from Europe to America and the displacement of the Navajo from their own lands to reservations. This charming story of cross cultural friendship is handled with a pleasantly light touch, but it does feel disingenuous to ignore persecution of Native Americans, after starting the story with the persecution of Jews in Russia. 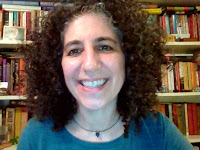 Reviewer Heidi Rabinowitz is one of the co-admins of The Sydney Taylor Shmooze, along with Susan Kusel and Chava Pinchuck. She hosts The Book of Life Podcast: A Show About Jewish Kidlit (Mostly) at bookoflifepodcast.com. Heidi is Past President of the Association of Jewish Libraries, and Library Director at Congregation B'nai Israel of Boca Raton, Florida.
Charlesbridge Heidi Rabinowitz Johnson Yazzie Kathryn Lasky Picture Books Review